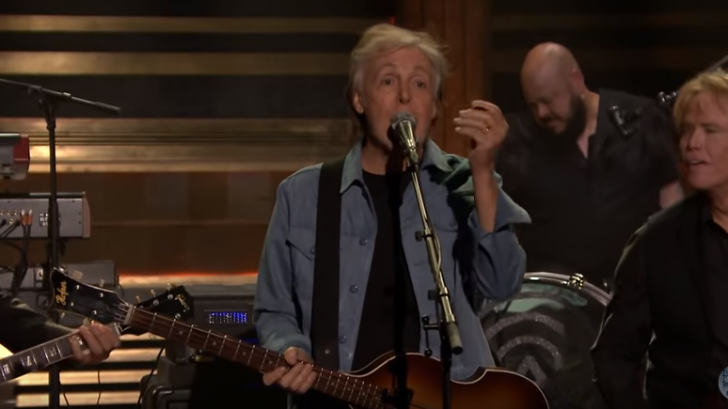 Every single musician from the younger generation should take note – this is how genuine talent sounds like. And with so much crappy music being released every day, Paul is a breath of fresh air. And he’s been on full-on promo mode these past few weeks which is why we see him basically everywhere – from TV shows to magazine covers and even podcasts.

And during his guest appearance earlier this month on The Tonight Show Starring Jimmy Fallon, we’ve seen him surprise some of his fans riding an elevator AND more importantly, he debuted the lead single “Come On To Me” from his 17th studio album “Egypt Station.” It peaked at #6 on Billboard’s Adult Alternative Songs chart – his first top 10 in over 20 years.

He described the song as a “raucous stomper that fans that first spark of chemistry into a rocking blaze.”

Paul McCartney has been on a roll with his promotion. And you know what, we’re digging all of it – from the interviews to the pranks. We’ve always known he’s one of the most talented singer-songwriters in the history of music so it’s nice to see him have a great time too.

And he opened up about his songwriting process which we’re all curious about.

“The good thing about songs is if you are in a bad mood, it’s a great thing to do. It’s like a therapy for yourself.

“If you’re feeling bad, you can go off somewhere with your guitar, and you can begin telling your troubles to the guitar and you can work out your problem. Normally, you get a bit optimistic toward the end of it, and suddenly you have a song. And you feel better.” – Paul McCartney on music

He’s a real gift to humanity.