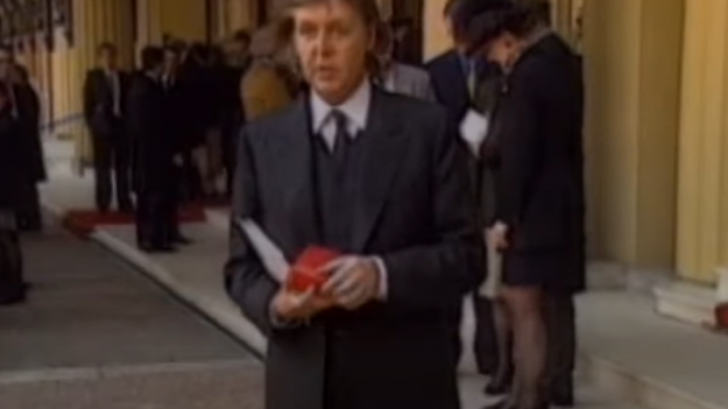 When Queen Elizabeth II knighted Paul McCartney in 1997, it was a magnificent moment. He expressed his feelings as if he were Harry Potter. Paul received the award for his contributions to music, and he had previously received an MBE with his beloved bandmates in 1965.

The Beatles publicly stated in 1965 that the Queen was bestowing MBEs on them (Member of the Order of the British Empire).

The reporters inquired as why they believed they were being honored. They claimed to have paid a large amount of tax to the British government. When asked if they thought they earned the MBEs, they said yes. George said, “It’s not up to us to say that. The Queen must have thought so, or she wouldn’t have given them to us, would she?”

Although there was considerable criticism of the band accepting the accolades, The Beatles were greeted by hundreds of cheering fans as they arrived at Buckingham Palace. One guy scaled the palace walls, which is a crime punishable by death today.

Entering into the palace, according to John Lennon, was like walking into a fantasy, and The Beatles were extremely anxious. He then said that they smoked marijuana in the toilets prior entering to ease their nervousness. George, on the other hand, said that they just smoked a single cigarette.

As Queen Elizabeth II knighted Paul, he stated he felt like Harry Potter.

In an interview on The Late Show with Stephen Colbert in 2019, the ex-Beatle discussed his 1997 knighthood. When the queen knighted Paul, he stated he felt as if he was Harry Potter.

“It’s quite something, you can imagine,” Paul explained. “And what you have to do is, you’re not allowed to turn your back on her. So you walk in, not turning your back on her for one second. You stand in front of her, you walk down there, and there she is. The queen of the whole world!

“And she’s got this sword. Anyway, you’ve got a little red cushion, and you’ve been told what to do. So you kneel down on the cushion, and then she takes the sword and does it either side of your shoulder, and then says, ‘Arise, Sir Paul.’

“So you were an ordinary guy, and then she does that [tapping each of his shoulders], you’re just magically Sir Paul. It’s just like Harry Potter.

“But the thing is, the sword is special. The sword belonged to Æthelred the Unready. It’s an old sword.”