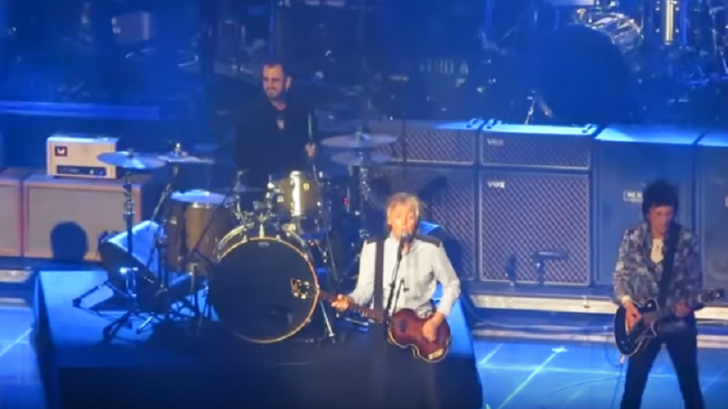 This Is Every Fan’s Dream Come True

Already in their 70s, both Paul McCartney and Ringo Starr are definitely showing no signs of ever slowing down. They may be well past their prime but time and again, they’ve proven that they can still manage to outshine younger musicians.

Audience in the 02 Arena in London witnessed a mini reunion of the Beatles. Paul McCartney, who is quite busy with his new album and Freshen Up tour, surprised the crowd when he called out Ringo to perform their 1969 classic hit “Get Back” during his encore. They are also joined by The Rolling Stones guitarist Ronnie Wood.

“We’ve got a little surprise for you. It’s a surprise for us, actually – it only happened today.” – Paul McCartney

It was a concert to remember as it celebrated Paul McCartney’s incredible five-decade career. The 40-song set included hits from Wings and The Beatles and some of his solo works too. It wasn’t just a star-studded lineup for a special performance, there were several famous guests too like The Who’s Roger Daltrey, Spice Girls’ Geri Halliwell, One Direction’s Harry Styles, actor Rami Malek, Coldplay’s Chris Martin, and George Harrison’s widow Olivia Harrison.

After the epic performance, Ringo commented:

“I don’t know about you, but that was a thrill for me. Peace and love everybody and a Merry Christmas.”

After the two rockers left the stage, Paul also said, “I’m just going to let that moment sink in.”

Paul’s daughter and iconic fashion designer Stella McCartney even shared an Instagram shot of her along with her dad, Ringo, Ronnie and actress Dame Emma Thompson. So yes, it was truly one unforgettable night for everyone. Some members of the audience couldn’t even believe what they just witnessed.

We also know we’re not the only ones who want more collaborations between Ringo and Paul! Besides, this is clearly the supergroup we never thought we needed.