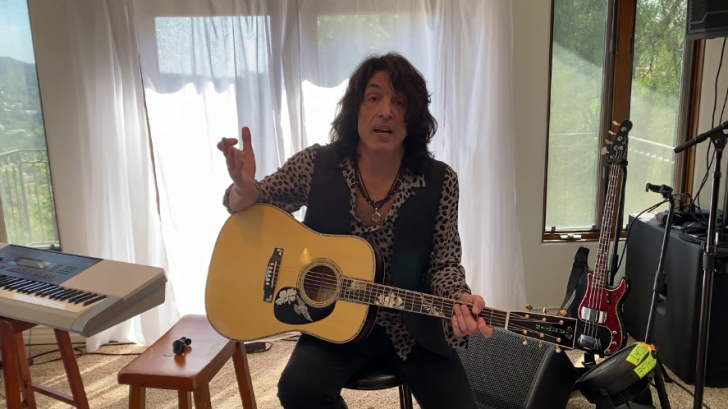 Paul Stanley performs a set of KISS classics in a new home video during his extended self-quarantine as part of the COVID-19 pandemic.

After welcoming his viewers to his jam session, Stanley explains the idea behind the home video series;

“It’s funny,” says Stanley, “because somebody, a couple of days ago, had gotten in touch with me and said, ‘Why aren’t you spending more time doing these videos and get ’em really, really great — get the performances great, get the singing great, the guitar playing great?’ I said, ‘Because the people I’m doing it for know that’s not what it’s about. This isn’t a performance, it’s not a concert, it’s not a recital — it’s me and you hanging out. And that means that — is it perfect? Hell no. But we get to have some fun. I get to have some fun.

“With that in mind, while we’re doing this, we should all remember that there are doctors, hospital workers, sanitation people, police, people at supermarkets, delivery people — all these people are making this possible for us. And some of them are under horrific conditions and they’re only trying to keep their heads above water and they’re in a real dangerous situation. People in the hospitals working don’t have what they neeed, yet they do it. So, my prayers for all of them, and let’s not forget about those people.”

“So, I was wondering, what will I do now?,” he continues. “What can we do? And I thought, maybe I’ll play just some riffs, play some little guitar parts, and you can sing if you want. You’re in the band. If you know the parts of the song, sing along. It’s just us — you, me and… I don’t know, two hundred thousand people, three hundred thousand people. Whatever it is. So we can have some fun. And I’ll try to pull something out of the old memory bank. And let’s see what we get.”

KISS has rescheduled their upcoming tour dates in South America as part of their farewell trek; originally set to kick off in April and May, and now have been moved to late in the year.