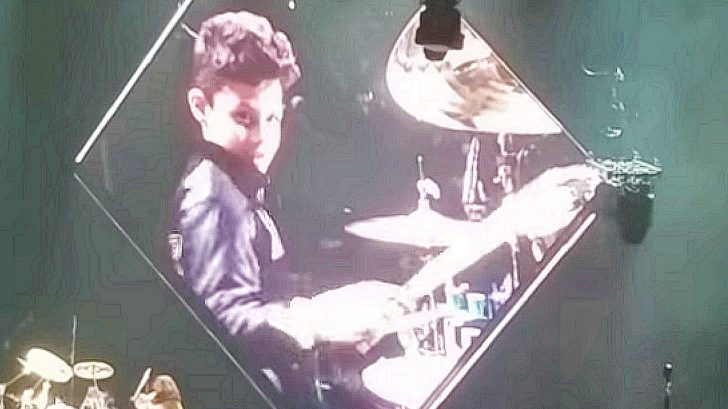 “Hey, Little Fonzie, Can I Have My Concert Back?”

You’ve know that it’s a slow and hilarious descent into hell if you give a mouse a cookie – but what happens when you give an 8 year old the spotlight?

Arena rock giants Foo Fighters found this out the hard way during a show in Nashville, Tennessee when they invited an 8-year-old fan onstage to flaunt his musical skills. Frontman and all around good guy Dave Grohl had been making references to the boy, affectionately dubbed “Little Fonzie,” all night before ultimately inviting him onstage to play the drums in place of Foo Fighters drummer Taylor Hawkins, not expecting what would happen next.

The kid absolutely shredded that drum kit, blowing away Dave and the audience. Unfortunately for Foo Fighters, Little Fonzie took that as his cue to keep going and refused to give up his spot behind the kit.

To his credit, Grohl kept his winning sense of humor as Little Fonzie stole his thunder, cracking “Hey, Little Fonzie, can I have my concert back?” before realizing that he’d completely lost control of his own concert.

“I don’t know what to do. What are you going to do?” he laughed. “There’s nothing we can do! We have a couple more songs we want to do. All right! Here we go! He’s still going.”

But all good things must come to an end, and Little Fonzie was shooed offstage – “We’re not a daycare,” joked drummer Taylor Hawkins – with the promise of an ice cold Coke waiting for him offstage.

All jokes aside, Foo Fighters are great sports when it comes to the way they treat their fans, great and small. Check out Little Fonzie’s big (and adorable) moment in the video below!