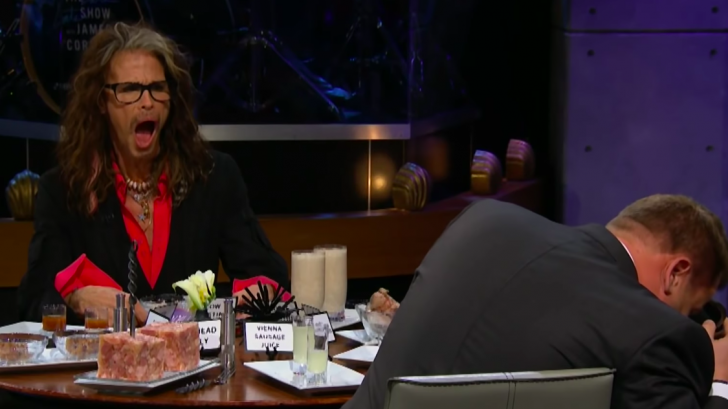 Steven Tyler is always up for fun and games. And on this episode of The Late Late Show, he certainly did prove that he’s all into games but not to rat out on his most loyal friends: his bandmates. Tyler sat down with Corden to play a game of “Spill Your Guts or Fill Your Guts” where the mechanics basically has the guest and host ask each other hard-hitting questions and then either have to answer honestly or pass and have to eat the most disgusting things ever served at the table.

When Corden asked Tyler how much he’s spent on drugs in his lifetime, Tyler had to say the truth to avoid eating a horrendous plate of pig head jelly. How much was it you ask? Oh, just around $2 million! “I snorted half of Peru!”, Tyler jokingly admits.

However, when Corden asked Tyler to rank all the other members of Aerosmith by their talent, the legendary rocker opted to eat cow guts instead. What a loyal bandmate he is!

Keep in mind that he’s already 70 years old and still cooler than anyone we know. Once he sits down for an interview, you just know it’s not gonna be boring. The guy has FUN written all over him. And he’s never shy about his past especially when it comes to his drug use. Maybe that’s why we love Steven so much – he owns up to his mistakes.

Oh and he doesn’t beat around the bush – he answers questions and is straight to the point. Man, if there’s one rockstar we’d like to share a cold beer and chat with, it would definitely be Steven. He’s the kind of guy you just want to hang out with if you want to have a good time!