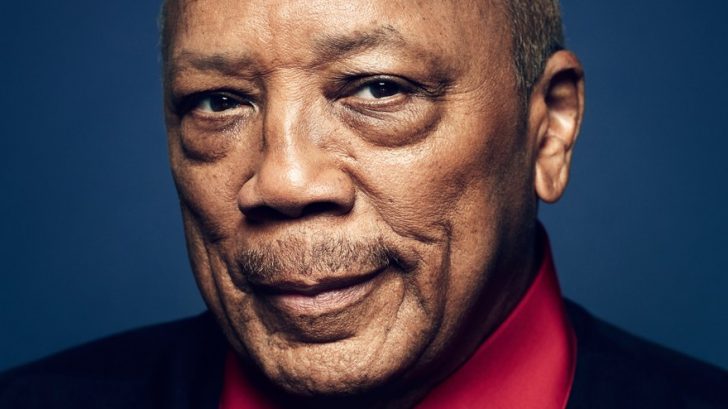 “All I’ve ever done is tell the truth…”

Quincy Jones has been making the rounds lately, dropping truth bombs and mind-blowing revelations wherever he went. You know when your grandparents don’t have filters anymore and they just say what’s on their mind? Yes, that’s exactly what’s happening with Quincy. It doesn’t matter if you’ve worked with him in the past or if you have nothing to do with the guy whatsoever, he’s going to talk about anyone with even an ounce of relevance today.

Here are some of the craziest things he said in his interview with Vulture:

12. He claims Michael Jackson stole a lot of songs and even called The King of Pop “greedy.”

“[Donna Summer’s] “State of Independence” and “Billie Jean.” The notes don’t lie, man. He was as Machiavellian as they come.”

“[Chicago mobster Sam] Giancana. The connection was there between Sinatra and the Mafia and Kennedy. Joe Kennedy — he was a bad man — he came to Frank to have him talk to Giancana about getting votes.”

10. He believes The Beatles were the ‘worst musicians in the world.’

“They were no-playing motherfuckers. Paul was the worst bass player I ever heard. And Ringo? Don’t even talk about it.”

9. He used to hang out with Donald Trump and he briefly dated Ivanka.

“He’s a crazy motherfucker. Limited mentally — a megalomaniac, narcissistic. I can’t stand him. I used to date Ivanka, you know.”

8. He doesn’t think Oprah would make a good president.

“She doesn’t have the chops for it.”

“When I go to Dublin, Bono makes me stay at his castle because Ireland is so racist. Bono’s my brother, man. He named his son after me.”

6. He once told Cyndi Lauper to leave the recording for “We Are the World.”

“And she was fucking up every take because her necklace or bracelet was rattling in the microphone. It was just her that had a problem.”

5. He thinks today’s music is not as good as it used to be.

“Producers now are ignoring all the musical principles of the previous generations. It’s a joke.”

4. But there are some modern artists he finds commendable.

“Bruno Mars. Chance the Rapper. Kendrick Lamar. I like where Kendrick’s mind is. He’s grounded. Chance, too. And the Ed Sheeran record is great. Sam Smith — he’s so open about being gay. I love it. Mark Ronson is someone who knows how to produce.”

3. He has a strong opinion on religion.

“The Catholics have a religion based on fear, smoke, and murder. And the biggest gimmick in the world is confession: “You tell me what you did wrong and it’ll be okay.” Come on. And almost everywhere you go in the world, the biggest structures are the Catholic churches. It’s money, man. It’s fucked up.”

“I went on a trip on his yacht, and he had David Crosby, Joe Walsh, Sean Lennon — all those crazy motherfuckers. Then on the last two days, Stevie Wonder came on with his band and made Paul come up and play with him — he’s good, man.”

“[Marlon] Brando used to go cha-cha dancing with us. He could dance his ass off. He was the most charming motherfucker you ever met. He’d fuck anything. Anything! He’d fuck a mailbox. James Baldwin. Richard Pryor. Marvin Gaye.”