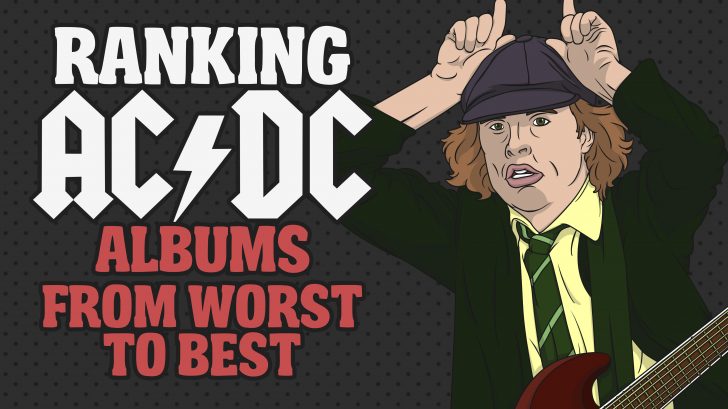 AC/DC are arguably one of the best hard rock bands that defined rock n’ roll more than any other band since they formed back in the 1970s. They experienced a lot of ups and downs, with the passing of their former frontman Bon Scott, and founding member Malcolm Young, the Australian legends has released countless studio, live, and compilation albums. In this list, we rank their internationally-released studio albums from worst to best. All that said, share your thoughts with us, what is your most and least favorite AC/DC album of all time — comment down below!

In this album, AC/DC’s musical style has changed and became more advanced. And there each song on this album sounds very different with each, or should I say, non-repetitive. Overall, an underrated album, if not a classic!

The album that set AC/DC’s to a fantastic comeback, arguably might not be the best work of AC/DC but this one is pretty much important, for one reason, even without Malcolm and Phil, AC/DC still manages to rule! There’s goes this saying that, no one can stop AC/DC, well, except, according to Angus, the death of every member.

8. For Those About to Rock, We Salute You

The dispute between Bon Scott and Brian Johnson for which is the best frontman is never-ending, but there’s no arguing that in this album, it is the best Brian’s voice has ever sounded. And despite “For Those About to Rock (We Salute You)”  obviously being the most popular track from the album, (and you’re lying as well, if “For Those About to Rock We Salute You)” is not one of the greatest rock songs ever), but of course there are a lot more to be considered, like “Evil Walks” and “Spellbound.”

Well, if you should judge a book by its cover, then this album would be on the top of this list. But it’s not, but don’t get me wrong, Dirty Deed Done Dirt Cheap is an awesome album, and the self-titled track is one of their best, and of course, Big Balls. This album is one of the finest moment of Bon Scott in AC/DC.

The Razor’s Edge never did go to the extreme of any commercial or critical success, but it has some good songs. And one of our favorite song from AC/DC came from this album, and that is “Thunderstruck.” which is considered one of the best AC/DC songs of all time. “Money talks” is also one of the notable songs from this album.

Well, music is very subjective when it comes to ranking the best. A lot of people consider this album as one of AC/DC’s best in their personal opinion, but in this list, we are ranking each one of them. High Voltage was not very critically successful during of its release and received much of criticism as well. But of course, without this album, we would’ve never got to hear AC/DC, one of best debut album to ever produced by a band.

Powerage, AC/DC’s finest hour! The most overlooked and underrated album. The album that has all the power that defines the band’s name and music.  Bon’s vocals is everywhere, Malcolm and Angus’ guitars are blistering as ever. This is the album that truly showcases the talents of the band.

3. Let There Be Rock

The album that you can listen the whole day and night. Three words for this: GREAT, AWESOME, and ENERGETIC. It is the album that contains some of our favorites track of AC/DC, “Let There Be Rock,” “Whole Lotta Rosie,” and “Go Down.”

The last album ever recorded by Bon Scott, it was the album that set AC/DC to popularity, largely. It cemented AC/DC as a force of Rock N’ Roll.