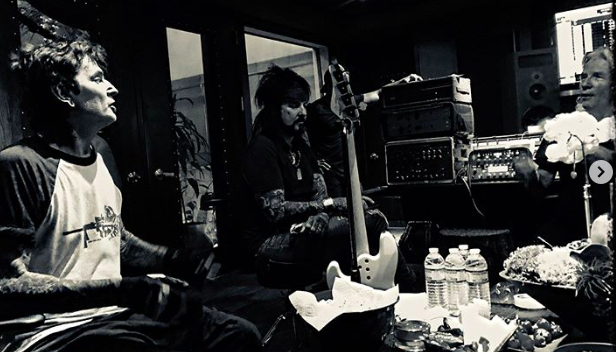 Is a reunion brewing?

Members of Motley Crue Tommy Lee and Nikki Sixx together with producer Bob Rock has been seen together in the studio again the past few days. Both Lee and Sixx have been sharing photos and videos of them playing and recording in studio with each other with nothing but vague captions with no further details, sure they are teasing something in the works. Even the official Motley Crue Facebook page shared a photo of Lee, Sixx and producer Bob Rock in studio with only a caption that says the date “28th August 2018” and nothing more. A photo from Lee’s Instagram shows another shot with the caption saying, “It’s that new sh-t!”.

At the dawning of 2015, Motley Crue bid farewell as they performed their final show, claiming to never tour again as a band. Lee even said that the band never even said goodbye to each other after that last show but now it seems like they didn’t really need to say goodbye at all!