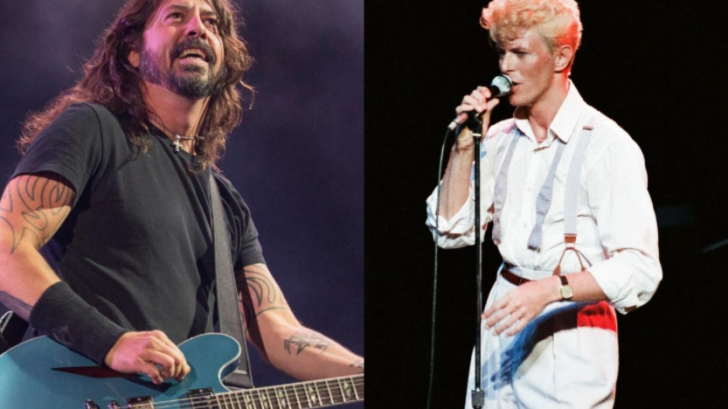 Dave Grohl shared out his story with the Thin White Duke, remembering singing “Suffragette City” with his high school band and vomiting after a party while “Space Oddity” played in his sister’s player.

He spoke about engaging with Let’s Dance drummer Tony Thompson and admitting he’d “stolen more than a few of his drum riffs in my career, to which he replied, ‘Oh, I know…‘”

He then continued sharing the story about seeing Bowie play live for the first time and accompanying him for his 50th birthday celebration at Madison Square Garden. Grohl himself first performed “7 Years in Tibet” before the rest of Foo Fighters performed on for “Hallo Spaceboy”.

“I remember glancing over mid performance to see his iconic eyes as the crowd roared,” wrote Grohl. “And they were looking right into mine. Give me chills, still to this day…”

Afterward, Bowie’s guitarist that time, Reeves Gabrels, summoned Bowie, Grohl, and Pixies’ Frank Black to record a tune for his solo work, Ulysses (Della Notte). Grohl amused at Bowie sitting on the carpet, circled by “photographs and postcards,” and “write lyrics, line after line, with no correction… Once finished, he drew a crude, yet beautiful self-portrait at the bottom of the page.”

After Bowie placed his vocals, Grohl realized that the lyrics sheet was left behind on the stand. “I snatched that mother f**ker up fast than you can say ‘Jean Genie’!” He then gave it to his sister, Lisa, the one who introduced him to Bowie’s music.