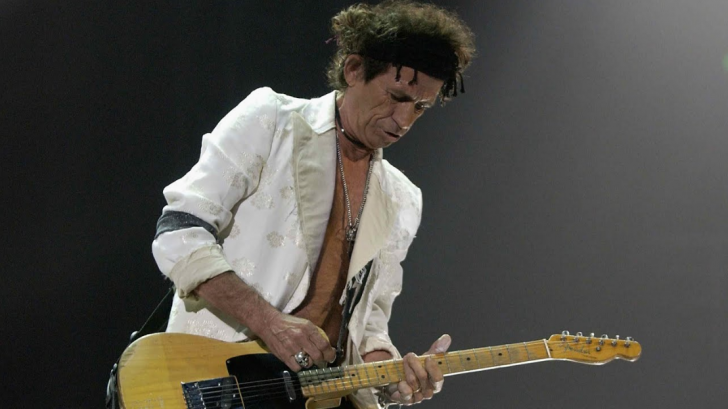 via @The Best Of - Home Of Classic Music | Youtube

The Tales Of The Legendary Immortal

Keith Richards may have matured excessively by age (and substance abuse), but anyone who has read his memoir, or heard his stories, sure enough, that the iconic Rolling Stones guitarist has survived hell several times and live to another day.

Let’s look back in the Career Misadventures Of Keith Richards:

In February 1977, Rolling Stones was in their peak, and it was almost threatened to derail when Keith Richards was caught with an ounce of heroin by Canadian cops in his hotel room. He was charged with possession for the purpose of trafficking. When his case was brought up in October ’78 “there were five to six hundred people outside every time I turned up in court, chanting, ‘Free Keith, free Keith,'” the guitarist recalled. Between this avid fandom, a halfhearted prosecution and a muscular defense, Keith was found guilty but walked anyway. (While out on bail, he even partied with Canadian Prime Minister Pierre Trudeau’s frisky young wife, Margaret, who was hanging out with the band.) His community-service sentence: to play a benefit concert for the blind — a nod to Rita, the devoted, sightless Stones fan who buttonholed the judge and pleaded on Keith’s behalf. “She hitchhiked to our shows. The chick was absolutely fearless,” Richards wrote in his 2010 memoir, Life. “The love and devotion of [fans] like Rita is something that still amazes me.”

“Adrenaline is the most amazing thing we have,” Richards told an interviewer in 1992. How did he do it? “Nine days without a wink,” he bragged. “I fell asleep standing up, eventually … I was just putting another cassette back on the shelf, and I was feeling great, and I turned ’round and fell asleep. I fell against the edge of the speaker. Woke up in a pool of blood, wondering, ‘Is that claret?'”

The Perfect Combination Of Acid, Cops, And Mars Candy Bar (1967)

“There’s a knock on the door, I look out the window, and there’s this whole lot of dwarves outside,” wrote Richards. “I’d never been busted before, and I’m still on acid.” Police received a tip from a tabloid paper (“He never walked the same again,” Richards recalled). There was also a rumor that Jagger licking a Mars candy bar pushed into Faithfull’s vagina.

Five years after the death of Keith’s father, Bertrand Richards. Keith committed that he did something to brought him closer to his father. “The strangest thing I’ve tried to snort? My father,” Richards reportedly told the U.K.’s New Musical Express in 2007. “He was cremated, and I couldn’t resist grinding him up with a little bit of blow,” Richards said. “My dad wouldn’t have cared, he didn’t give a shit.”

Richards has almost died several times, but the closest one he called it as “most spectacular”: On December 3rd, 1965. Rolling Stones were playing “The Last Time” in front of 5,000 audiences, at the Memorial Auditorium in Sacramento, California. When his guitar touched the microphone stand, a flame burst out, and Richards dropped to the floor and was unconscious. Jeff Hughson, the show’s promoter thought Richard had been shot. “I literally saw Keith fly into the air backward. I thought he was dead. I was horrified. We all were,” said an attendee, Mick Martin. Keith turned out was shocked by the electrical surge from the mic.