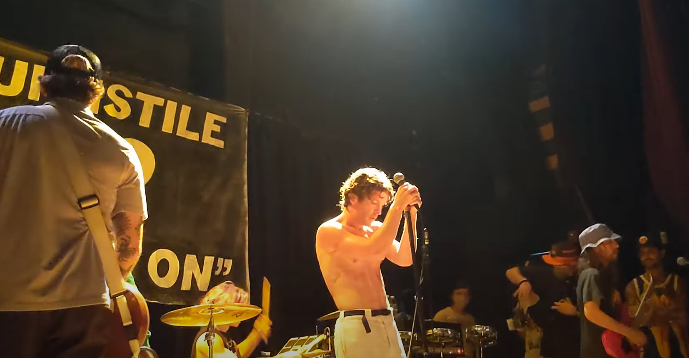 Strange as it may sound – during a renegade concert a pooper decided to poop! Where do you ask? At the very pit, the hardcore band Turnstile was performing on in Santa Cruz. The result? The greasy doo smeared onto the stage platform.

It was during the Turnstile concert supporting their new album, Glow On, playing at Vets Hall on Aug. 30. At some point, the man’s grease ended up on the side of the platform –   how it ended up there was probably because while someone was dancing in the pit and stepped on it.

Twitter has been crazy about the Turnstile Concert Pooper in California. They’ve been trying to identify the man who succeeded in emptying his bowel during the concert, but the concert footage didn’t provide any suspect.

SOMEONE SHITTED IN THE TURNSTILE PIT LAST NIGHT NO LIE

ATTN 40831: I cant believe this but yes human shit ended up on stage last night during Turnstile. As hilarious as this is it’s also disgusting & EXTREMELY unsafe. Plz if you have any idea of who it was, plz let me know as that person should not be allowed at shows ever again.

I have a very big interest in the shit on stage at the Turnstile show story.

I just beat the “did you shit during Turnstile” allegations ????

as someone who has, embarrassingly, shit their pants in the past (even had some recent close calls…), I STAND WITH THE TURNSTILE SHOW SHITTER. if you've never come close to shitting your pants, god bless your amazing bowels. some of us aren't so lucky. literally "shit happens"

Turnstile’s new album, Glow On was released on August 27, being their first one in three years.