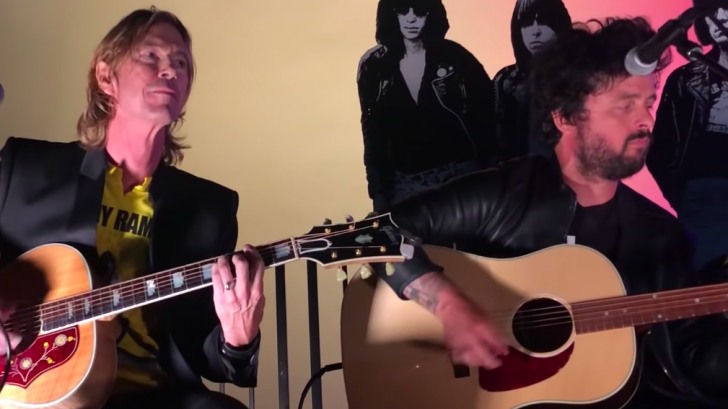 This is the all-star rockstar line up seen together during the tribute show for Ramones’ guitarist Johnny Ramone. This is the annual event that Johnny Ramone’s widow, Linda, puts on to celebrate her late husband’s life and music. It’s an intimate show of only over a hundred people set at the Hollywood Forever cemetery. This year, Linda Ramone was able to pull out Armstrong and McKagan from their busy lives and their usual stadium concerts to jam out at a smaller and more intimate gig.

Advertisement
The four musicians were able to perform Ramones top hits such as  “Rockaway Beach,” “Judy is a Punk” and “Danny Says” together.
Billie Joe shares,
“hen I was a kid I watched, on late night TV, a show they were playing in Ann Arbor and if you look it up it’s on YouTube. They sounded so f-cking good and the energy in the crowd was so completely into it and they had the big banner behind them with the big symbol and I always remember that. The imprint is permanently imprinted into my brain.”