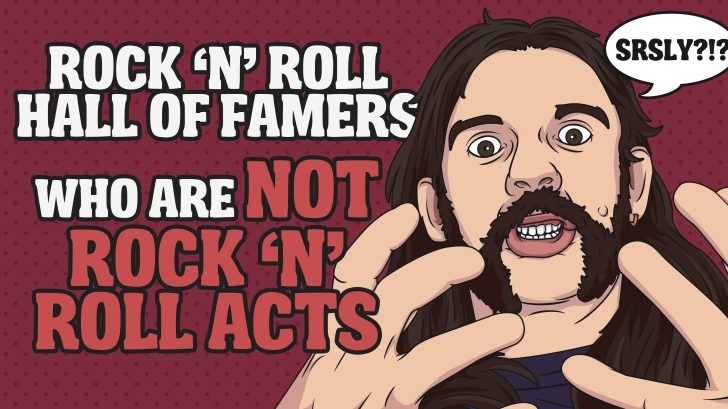 Are there any rules that define what artists are eligible to get inducted to the Hall? Except for releasing records for at least 25 years earlier. There’s not even, generally speaking, strict rules about the definition of “Rock and Roll.” The committee and voters elect artists whom they want to elect, or at least they are suggesting that they consider these artists to be rock and roll. Sadly, there’s no way to ever stop them from electing non-rock and roll acts from entering the hall which most of us would not consider “EVER” to be rock and roll.

How do we really define rock and roll in the first place? Here it is, Kurt Loder, the MTV News icon, wrote about the subject back in 2002:

“What exactly is rock and roll? Having spent many years as a member of the Hall of Fame nominating committee (a position I no longer hold), I can tell you that endless hours have been devoted to this question, and it has never been definitively answered. Some critics — most notably the English writer Charlie Gillett, in his groundbreaking 1970 book, “The Sound of the City” — have argued that rock and roll is, if not “dead,” at least historically complete, and now a part of the past.“

Some people would define it today “AS LONG AS THEY ROCK.”–  Sounds crazy! But if we refer to it as the definition, rappers, RnB, and pop would not be rock n’ roll. There was even a moment when Gene Simmons of K.I.S.S. publicly slammed the induction of the RAP group called NWA, who he complained that they weren’t rock. One member of the group the now Hollywood actor Ice Cube responded by saying:

Both have points, but if we narrow it down a little, there are basically some forms of music which aren’t rock and roll, which includes, classical, jazz (just ignore what Ice Cube said above, he doesn’t really know anything), folk, and country which clearly existed long before rock and roll. So it’s pretty hard to consider them as such.

But can non-Rock N’ Roll artists enter the Hall? I think they shouldn’t because it really hurts the meaning of “ROCK N’ ROLL.” And it definitely creates a massive confusion in the public’s mind. As for these non-rock acts, they should have never accepted the honor in the first place, because they know that they had nothing to do with rock music.

“Rock and roll (often written as rock & roll or rock ‘n’ roll) is a genre of popular music that originated and evolved in the United States during the late 1940s and early 1950s, from country music and African American musical styles.”

To name some of the Rock N’ Roll Hall of Famers who are non-rock n’ roll acts; check the list below.

In my humble opinion, these non-rock artists mentioned above should have their own Hall of Fame, in their own respective genres. Anything outside of “Rock N’ Roll” shouldn’t be inducted, selected, or elected into the Hall of Fame.

I can understand artists, who pioneered and changed the popular music in the early days, are inducted in the hall. But I’m not quite sure, why artists such as Madonna, or Tupac are there. Of course, these artists have contributed to the popular music and in the pop culture for what its worth, but I hope they do understand that they came after the being of “ROCK N’ ROLL,” not before it.