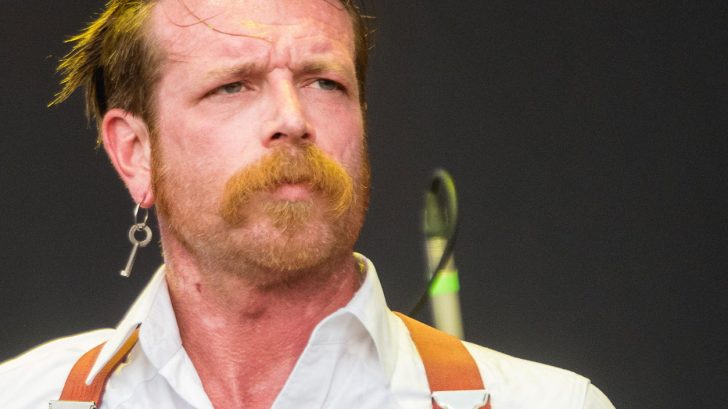 Unless you live under a rock, it was impossible to miss the March For Our Lives protests that went on worldwide over the weekend. With more than 850,000 turning out in Washington D.C. alone, the movement spurred on by the horrific mass shooting that occurred last month at Parkland, Florida’s Marjory Stoneman Douglas High School did exactly what it was intended to do: make enough noise that you had to listen, whether you agreed with them or not.

While the responses to these kids’ call for action were generally positive, not everyone is on board. Eagles of Death Metal frontman Jesse Hughes took to Instagram yesterday, blasting March For Our Lives protesters as ‘pathetic’ and ‘disgusting’.

Hughes, who survived the 2015 Bataclan massacre during which 90 people were killed and hundreds more injured, slammed the teens’ efforts as “exploiting the deaths” of their classmates and accused them of taking “multiple days of school at the expense of 16 of your classmates [sic] blood”.

The backlash was swift as fans and critics alike took to Twitter in droves:

Jesse Hughes you are “pathetic and disgusting” and I’m ashamed to have owned your albums and supported your band.

HOLY FUCK. This is where me and Eagles of Death Metal finally, totally part ways. Fuck you, Jesse Hughes, fuuuuck you. You went through hell in Paris, yet still posit ridiculous arguments and insult scared, brave children. Disgusting. Read/see: https://t.co/PbOLgIdA0X

Jesse Hughes, shut the fuck up, for the love of God https://t.co/gkxh9ybP7p pic.twitter.com/JwW0GcsoTf

Hey, @jesseEODM I think going out of your way to attack a fellow victim of gun violence, let alone a child, is a pretty pussy ass move. Might wanna check yourself cause your ignorance is showing.
Amendments are meant to be amended. pic.twitter.com/qjlOrM4mnD

@jesseEODM "And these children that you spit on
As they try to change their worlds
Are immune to your consultations
They're quite aware of what they're going through"
-David Bowie.
How dare you spit on those children Jesse? You disgust me.

While Hughes didn’t walk back his comments, he did take to social media once more, deleting the posts shared over the weekend. In one now deleted post, he posted a promise to keep his political beliefs separate from his music career and invited others to do the same:

“I’ve made a rule and [sic] my musical life that everyone should check their politics at the door,” he began. He then announced that he’ll be creating a second Instagram account where he and likeminded fans can share their political beliefs, before signing off with this reassurance: