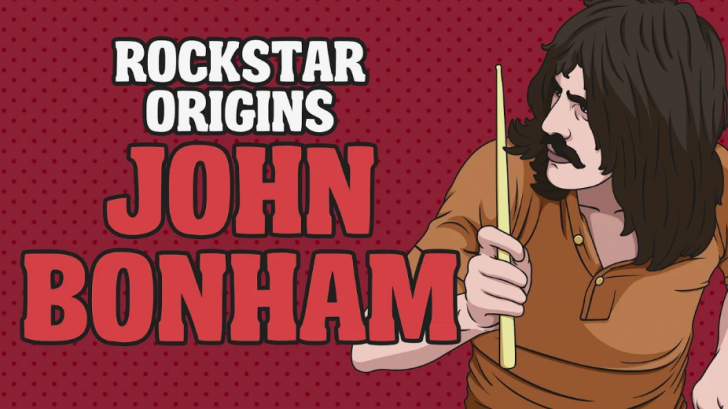 John “Bonzo” Bonham is celebrated by many as one of the greatest drummers ever in rock history. He has inspired and influenced not just fans but fellow musicians and generations of drummers. Even after his untimely death, he continues to be remembered as one among the greatest rock ‘n’ roll drummers of all time, his out-of-this-world talent still being talked about and praised. As ‘Modern Drummer’ magazine dubbed him, Bonham is ‘the king of rock drumming’. Led Zeppelin and the world over definitely felt his absence and loss. The legacy of the legendary godfather of drumming lives on, but one may wonder about his beginnings. How did he ascend to the very top of his game as a drummer? Let’s dive in to his roots and find out.

Born John Henry Bonham on 31st May 1948 in Redditch, Worcestershire, in the Midlands of England, he was already on borrowed time even from his birth. His mother was in labor for 26 hours, after which, the infant John’s heart stopped beating. The doctor managed to revive him and later said that it was “a miracle” that the baby had survived. And that miracle baby would go on making and playing beats for the world to be in awe of.

From Pots and Pans to Playing for Bands

John caught the music bug at the very tender age of five. As a young child, he would turn household objects such as bath salt containers, pots, and pans from the kitchen and a circular coffee tins into his own percussion instruments, beating them with knives and forks as a substitute for drumsticks. That’s when John’s parents discovered their son’s affinity to drumming.

When John was ten years old, his mother bought him a real snare drum, and it wasn’t until he was 15 that his parents gave him a full drum kit. His parents supported their son’s passion for music even though they didn’t have much. In fact, according to John, his first drum kit  “was almost prehistoric… Most of it was rust.” But he made it work.

John dropped out of school at sixteen and to begin working as a builder for his father, a carpenter. With this job, he had the freedom to develop his music and play the drums for local bands.

John Bonham and Robert Plant grew up together in Kidderminster, Worcester in England but they had only started playing music together in late 1965 when John joined the band called The Crawling King Snakes where Plant was lead singer in. He was playing drums for the group A Way Of Life at the same time.

After a few years of playing in local pubs, Robert Plant joined Jimmy Page’s group The New Yardbirds, and in turn, recommended drummer Bonham to Page. They then added John Paul Jones as the fourth member of the group. Jones was recruited as the bassist/keyboardist.

The four guys started playing together at a record shop on Gerrard Street in London and went on a short Scandinavian tour in 1968 as the New Yardbirds. They recorded their live sets and made their first album out of that, with Page covering the costs himself. After the album was complete, the band was forced to change their name due to a cease and desist order from musician Chris Dreja who was part of a band called Yardbirds. The band came up with “Led Zeppelin” because some people in the band stated that they would all go down like a “lead balloon” which was a British idiom for “disastrous results.” The results have been the opposite of disastrous until the untimely disaster of Bonham’s sudden death the world did not expect.

Sadly, John Bonham he died a tragic death at the young age of 32, after he had consumed 40 shots of vodka the night before his death. Bonham was reportedly so intoxicated that he did not wake up when he began vomiting. This resulted in his death due to asphyxiation. The band took the loss so hard that they announced that they could not continue without being Led Zeppelin without John Bonham any longer.