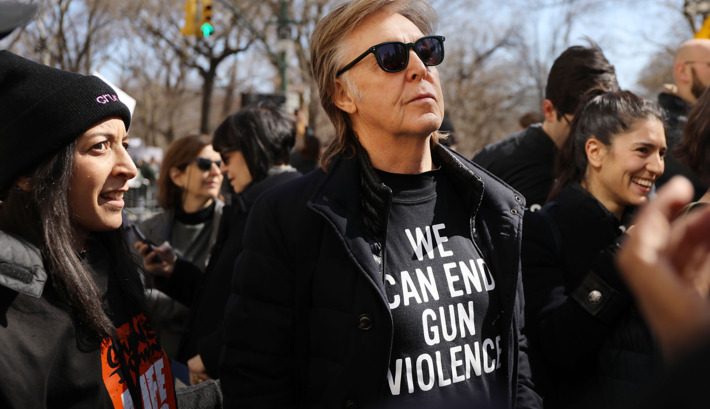 Last March 24, thousands of people gathered in major cities across the United States to rally against gun violence. This student-led demonstration was held in the wake of school shootings most recently the incident at the Marjory Stoneman Douglas High School in Parkland, Florida last February 14.

According to their website, they aim to save lives with the following means:

Paul McCartney was one of the attendees at the protest in New York. He told CNN, “One of my best friends was killed in gun violence right around here, so it’s important to me.” This is in reference to the murder of his Beatles bandmate John Lennon back in 1980. McCartney was just one among hundreds of celebrities who supported the cause. But even though some artists couldn’t make it to the rallies, they still gave their all-out support via social media.

Proud of the kids & families of #MarchForOurLives for taking the streets to demand their lives and safety become a priority,and that we end gun violence in our schools and communities. EQUALLY ASHAMED OF ARTIST W/ A VOICE THAT STAY MUTE OUT OF FEAR OF LOSING $ BY UPSETTING FANS.

On March 24, this movement will take to the streets to demand we end the epidemic of mass shootings. Sign the petition: https://t.co/2Bggm1KbH4

I believe this is set to be one of the biggest marches in history.

Our hearts, minds and spirits are with everyone marching today! So many humans United! It’s a harder path to take if you want stand for what’s right! Thank you so much to the brave, beautiful souls who are unafraid to #March4OurLives #MarchforOurLives

So PROUD to live in this great country where we can raise our voices and gather in protest for change but IT WILL ALL MEAN NOTHING IF YOU DON’T VOTE. Honor your freedom by using it. #MarchForOurLives pic.twitter.com/wBLYgbw5Dm

I am against gun violence.

I am against any aggressive violence.

I believe in the non agression principal.

It is wrong to coerce, assault, or defraud people. Full stop.

I’m against those things every day. #LibertyEveryday #MarchForOurLives

Protect kids, not guns! Use your voice, share this photo and march in your city tomorrow. #IWillMarch #MarchForOurLives pic.twitter.com/ltNrixxVME