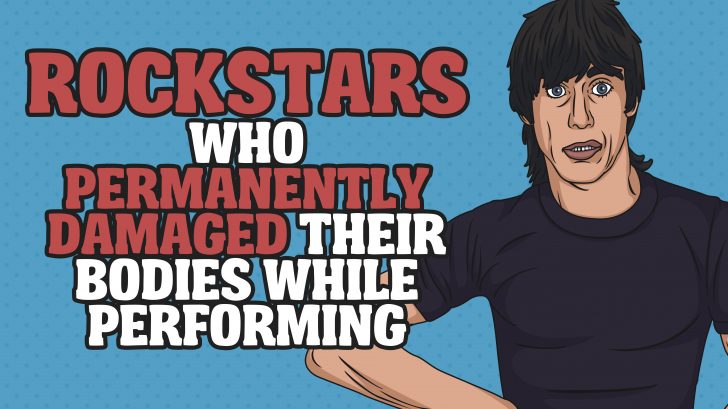 Who said performing live is easy? Sure you just go onstage and do your thing but the following rockstars are proof that if you want to put on a good show, you have to go all-out. Some injuries happen because of unforeseen circumstances but for others like Marilyn Manson and Iggy Pop, they pretty much liked to self-mutilate because it’s all part of their act.

But for rockers like Prince, he takes his craft VERY seriously and his stage antics eventually took a toll on his body. They took their performances to the next level but damaged their bodies in the process.

You can pay someone to double or triple check all the props in your show and when you start performing, something can still go wrong. Just like what happened to Marilyn Manson who, by the way, is a lot like Iggy Pop when it comes to going to extremes to keep the audience entertained.

He’s been in trouble several times but this one is different. Late last year at the Hammerstein Ballroom in NYC, a prop (two giant pistols) fell atop him as he was walking toward the back of the stage during the “Sweet Dreams (Are Made of These)” number. Prior to that, he also broke his ankle at a Pittsburgh show.

Where do we even begin with Iggy Pop? The guy always wants to take his performances to new heights even if that means hurting himself in the process. He goes all-out and takes everything to the extreme. He deserves an entire list dedicated to his stage antics.

And what did he get in return? In an interview with Rolling Stone, he said, “I have a dislocated shoulder. I have a lot of cartilage lost in my right hip. Both knees are about to go. I have one leg about an inch and a half shorter than the other.”

Those who were close to him knew he suffered from chronic hip pain which was why he got hooked on painkillers for years and that eventually caused his death. It was mainly due to him regularly performing in huge platform heels. The thing is, he didn’t just wear them while singing, he actually jumped off while wearing those uncomfortable shoes. He required hip replacement surgery but being a Jehovah’s Witness, he chose faith over his health. He finally gave in in 2010 and underwent operation but it was not successful in eliminating the pain.

And even well into his 40s, he continued showing up on stage in heels even though aside from hip pain, he was already experiencing ankle soreness. It became so bad he would carry a cane with him.

In 1999, Michael Jackson had an accident at a Munich concert while performing “Earth Song.” Due to mechanical failure, the bridge collapsed sending MJ down below the stage. Everyone wanted to take him to the hospital immediately but he refused and continued performing. He finished a song then went to his dressing room and collapsed. Although he didn’t sustain serious injuries, he was severely bruised and he struggled with chronic back pain for years because of it.

Roger Daltrey once revealed that Pete Townshend is “almost deaf.” You see, we all know The Who’s stage antics – from Pete’s guitar smashing to Keith Moon’s penchant for putting explosives inside his drum kit. And while that has become their trademark, it’s not without consequences.

Pete currently suffers from tinnitus and partial deafness which are partly the result of playing at the Charlton Athletic Football Club which was listed by the Guinness Book of World Records as “The Loudest Concert Ever.” And another incident which contributed to his hearing loss was during their appearance at the Smothers Brothers Comedy Hour TV show. Keith Moon wanted their set to end with a bang literally so he upped his firepower by three times – Pete’s hair even caught on fire. In another interview, Pete also blamed the use of headphones.

Who said it’s easy being a rockstar? Sure, you get to live the rock ‘n roll lifestyle but you also have to deal with crazed fans. While playing at London’s Rainbow Theatre on Dec. 10, 1971, an audience member Trevor Charles Howell pushed Frank Zappa off the stage during their encore. Apparently, it was all because of jealousy since Howell’s girlfriend had a crush on Frank.

Everyone thought Frank was dead when he fell into the concrete orchestra pit. According to Frank in his autobiography, “The band thought I was dead. My head was over on my shoulder, and my neck was bent like it was broken. I had a gash in my chin, a hole in the back of my head, a broken rib, and a fractured leg. One arm was paralyzed.” He also had to use a wheelchair for an extended period which basically forced him not to tour for a few months. Even when he returned to performing on stage, he was visibly limping and could not stand for a long time.

This reminds us of the lyrics from Howie Day’s “Collide” – “Even the best fall down sometimes.” That happened to rock legends like Dave Grohl, James Hetfield and even Steven Tyler. But it’s not just the men. In 1977 while performing at a show in Tampa, Florida, Patti Smith hit the monitor with her foot and so she tumbled and plunged about 15 feet into the concrete pit.

Blame it on the poor lighting or that she didn’t have enough room to work with but she was left with a broken neck and back. She also needed months of physical therapy. Over 30 years after the horrific incident, she still feels neck pain: “I still suffer from it. My neck… I still get discomfort, spinal discomfort. It’s nothing I can’t live with.”