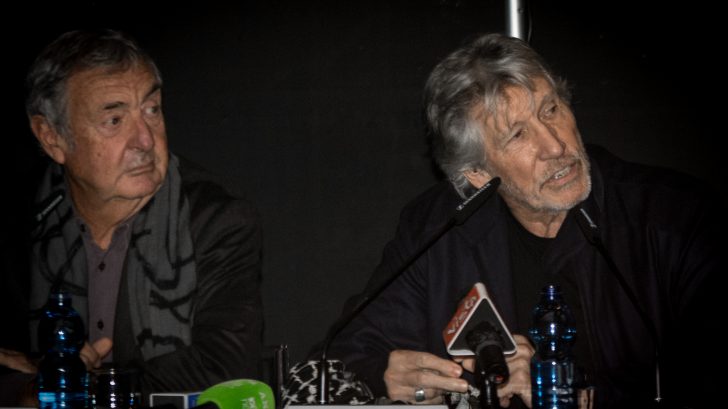 Pink Floyd's founding members Nick Mason and Roger Waters and Mayor of Rome Virginia Raggi (not in picture) attend the opening of The Pink Floyd Exhibition: Their Mortal Remains at Rome's MACRO contemporary art museum, on January 16, 2018 in Rome, Italy. The exhibition is an audio-visual journey through 50 years of one of the World's most iconic rock groups. (Photo by Andrea Ronchini/NurPhoto via Getty Images)

Pink Floyd drummer Nick Mason recently debuted his new band called Nick Mason’s Saucerful of Secrets last spring. They are mostly a psychedelic rock band that mostly plays deep cut selections of Pink Floyd’s catalogue. The group is composed of guitarist Lee Harris, Gary Kemp of Spandau Ballet, Pink Floyd collaborator Guy Pratt on bass and vocals. Nick Mason’s Saucerful of Secrets is not a Pink Floyd tribute band as clarified by Mason, though he also says that he wanted to “capture the spirit” of the era of Pink Floyds greatest moments.

In May 2018, Nick Mason’s Saucerful of Secrets made their debut at Dingwalls in London and followed it up with three small gigs at The Half Moon in Putney. In September 2018, they embarked on a European tour.

Mason teased that there’s a possibility his former bandmate Roger Waters may appear in one of the band’s upcoming shows but there’s no official confirmation just yet. The band is going on a North American tour next year beginning March 12 up until April 22, so may be Waters may make a special guesting appearance on one of those dates.

Mason reveals in an interview with Rolling Stone that he informed Pink Floyd band members Roger Waters and David Gilmour of his new project before he even launched it.

I thought that would be good manners,” he said. “I don’t think it was a matter of getting permission or anything, but what was great was that they were really encouraging.”

Mason also said that Waters “said that he might come and guest for a song or two, but I’m not holding my breath on that. We can worry about guest stars when we are a bit further down the line.”

“there’s a lot of enthusiasm from the band, which is the main driver. As long as someone thinks we could sell some tickets, we’ll absolutely go there. I think from my point of view, it is also the opportunity to go to places we never played as Pink Floyd, in particular South America. There’s such a fan base there and I’d really love to go there and do some shows.”

Do you know during which tour this picture was taken on?