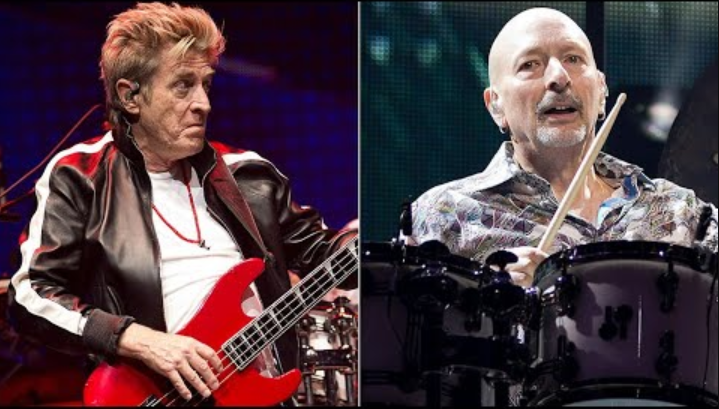 Ross Valory has countersued his bandmates, Neal Schon and Jonathan Cain, charging them with breach of contract and emotional distress. He seeks “past and future compensatory damages,” and asked a judge to decide who has the right to use the band’s name.

Valory’s cross-complaint was filed on April 6 in California’s Contra Costa County Superior Court, refutes “outrageous” claims against the earlier lawsuit in which Schon and Cain accused Valory and their former drummer Steve Smith of attempting a “coup” to take over Journey.

“Ross is shocked and devastated by the conduct of his lifelong bandmates,” attorney Andrew Spielberger told Business Wire, “and is disappointed that there was never any attempt to sit down and discuss what is most likely a misunderstanding and something that easily could have been worked out.”

Valory has contributed on every Journey album, save for 1986’s Raised on Radio. He also has co-written more than a dozen of Journey tracks, including the hits “Anytime” and “Just the Same Way,” and took over lead vocals on “Gone Crazy” from 2005’s Generations.

The filed 75-page legal action consistently disputes the idea that Valory and Smith were trying a coup to take control of Nightmare Productions Inc., the corporate entity that’s controlling the band’s name and trademark and calls the whole thing a “deceptive, misleading and false premise.” Valory said the board was trying to protect the band’s name after Schon made an effort to obtain a similar mark for his Journey Through Time offshoot group.

There is undisputed evidence that [Schon] was the one member of Journey who actively engaged in the conduct of applying for the mark that injured the value of the Journey mark owned by Nightmare Productions Inc.,” Valory’s lawsuit alleges.

Attached legal documents include Nightmare Productions’ official dispute before the U.S. Trademark Office’s trial and appeal board, arguing that Journey Through Time is “substantially and confusingly similar” to Journey’s original branding. The board were against the approval due to it causing “consumer confusion, mistake and/or deceit.”

That trademark document is dated March 3, which was also the same date as Schon and Cain’s original legal action. The lawsuit for the two arrived along with news that Valory and Smith had both been fired — an action the bassist was against with.

Valory said he’s still a member of the board of Nightmare Productions, despite what he deems a “reckless disregard for the truth.” Valory’s rights are “not terminated merely because [Schon and Cain] improperly claim that they have fired [Valory] from playing bass in the band Journey,” the cross-complaint argues. Valory said he was “merely participating in a legitimate vote to change the number of directors of Nightmare Productions Inc.”

Schon and Cain’s suit alleged that the group’s present bassist and former drummer were attempting to changes the board’s power base in order to plot a plan for Valory and Smith to retire from the road but still be paid. Valory said other members of the board includes founding Journey manager Herbie Herbert and longtime ex-singer Steve Perry — disagrees with any such scheme.

“There is no reason for [Herbert and Perry] to vote to give Ross Valory and Steve Smith a guaranteed income stream from Journey after [Valory and Smith] stop performing,” the lawsuit notes. Instead, Valory claimed Schon is using his initial suit “as a diversion away from his own wrongful conduct.”

The lawsuits include a pile of cash — Valory’s complaint reports that revenue projections for Journey’s already-announced 2020 tour were contracted at $50 million – and Valory said Schon and Cain’s attempt at firing him was meant to allow them to claim his share. The suit makes it clear that Valory disagrees with the current singer Arnel Pineda was “in on the money grab.”

Journey currently “split the revenues from tours or corporate performances on a 1/5 basis to each performer,” the cross-complaint reports, whereas “Schon and Cain could split the excised portions 50/50” whilst the group’s rhythm section out of the picture.

“Ross feels horrible about this whole unnecessary ordeal,” Spielberger added. “But he is a fighter and he has hired able counsel to defend and fight for his rights. I expect he will be vindicated and justice will prevail.”