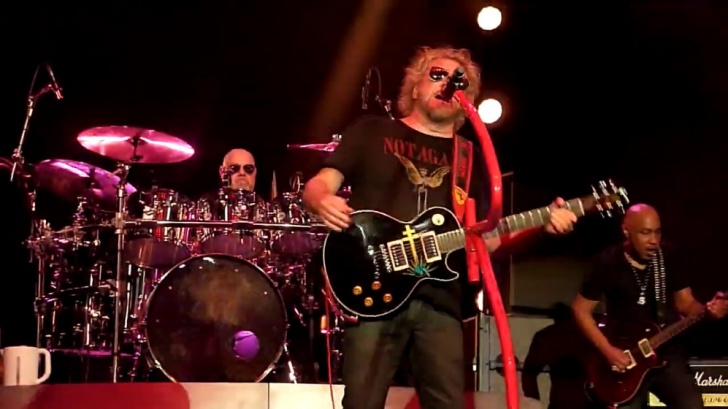 Sammy Hagar thinks that if concerts should return as soon as the number of new cases of COVID-19 flattened, he says it’s best for the economy.

Hagar’s summer tour with Whitesnake and Night Ranger hasn’t yet officially postponed, he admitted to Rolling Stone that the tour “ain’t going to happen.” But he and the promoters and owners of venues had discussed their gameplans when the global health crisis is over.

“It’s the flu, I guess, unless there is something I don’t know,” he said. “So there’s a season where it’s going to go, ‘Eh.’ I mean, someone is going to get it always. It’s like the cold or pneumonia. Someone is always getting something.”

Hagar noted that he’s “already talked to the promoters and the powers that be that own those places. I’ve said, ‘What if we put sterilization things all over the place? Hand sanitizers too. And hand out face masks.’ I’m not talking about now. I’m talking about when it first starts opening back up. In a big open-air setting, only sell 10,000 out of 19,000. Whatever. I’m fine with it.”

Hagar with his wife is self-isolating in their homes with their children and despite the implemented social distancing, he insistence on hugging his children.

“I’d just as soon die if I can’t do that,” he said. “Give me the disease and let me die if I can’t hug my wife and children. I see my kids and that’s it. I really can’t believe it. That part of it, I can’t stand it.”

Hagar’s desire to get back to his normal routines led him to say, he’d “rather personally get sick and even personally die, if that’s what it takes. We have to save the world and this country from this economic thing that’s going to kill more people in the long run.”

He added that “this shutdown of the economy is going to make that escalate 10 times and then we’re all going to be sick and you can’t walk down the street. I would rather see everyone go back to work. If some of us have to sacrifice on that, okay. I will die for my children and my grandchildren to have a life anywhere close to the life that I had in this wonderful country and freedom. That’s just the way that I feel about it.

“I’m not going to go around spreading the disease. But there may be a time where we have to sacrifice. We used to go to war for our country where hundreds of thousands of people died to keep our freedom and keep this country economically where everyone has a car and a home. Those days are changing, but that’s the way I feel about this whole thing. I’m not real big on dragging it out until we’re all fucked and there’s no way out.”