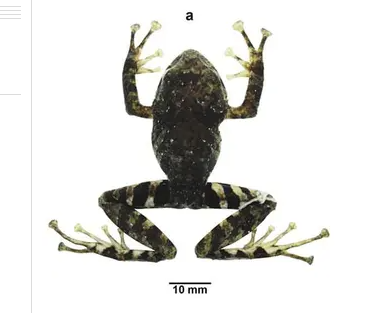 A new species of land frog described in the Cordillera del Cóndor by Ecuadorian researchers has been named “Pristimantis ledzeppelin”, in honor of the legendary British rock band Led Zeppelin.

Their finding, in the Río Blanco community, in that mountain range of the Ecuadorian Andean system, has been published in the scientific journal “Neotropical Biodiversity”.

Led Zeppelin not only inscribed their name in rock history by becoming one of the most famous bands in history, now it has also done so in science. Ecuadorian researchers have discovered a new species of land frog and have decided to name it in honor of the interpreters of ‘Stairway to Heaven.

The new species, whose full name is Pristimantis ledzeppelin, lives in the Río Blanco community, Cordillera del Cóndor, Ecuador, where it was discovered by researchers from the San Francisco de Quito University (USFQ) and the National Biodiversity Institute (Inabio).

This mountainous system is part of one of the most threatened ecoregions in the world, due to the expansion of agriculture and livestock frontiers, logging, small and large-scale mining, also due to the introduction of diseases, in addition to possible effects of climate change, scientists say. EFE