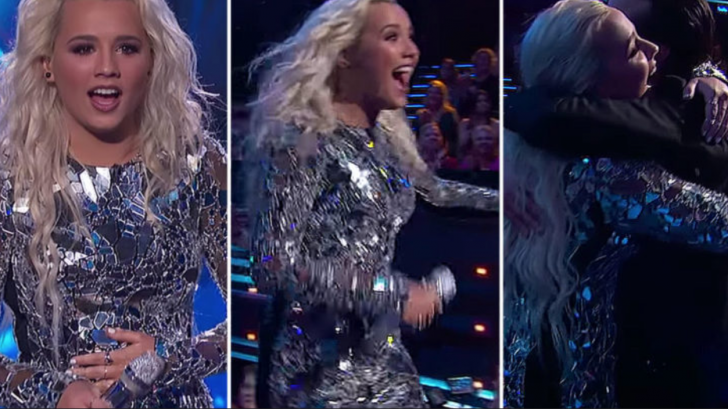 Did you catch last season’s American Idol? If not, buckle up: you’re about to see what happens when you don’t stop believing.

18-year-old singer-songwriter Gabby Barrett had her work cut out for her last season, tasked with performing three songs in the first part of a two-part special. A phenomenal singer who has proven week after week to be able to hold her own with any song you give her, Gabby crushed it with Miranda Lambert’s “Little Red Wagon” and an original song called “Rivers Deep”.

The real magic happened, however, when she hit the stage for her third song – a cover of Journey’s 1981 arena anthem “Don’t Stop Believing”.

At first glance, Gabby Barrett’s performance is business as usual. She’s already great at getting the crowd excited, and when it came time to open the throttle and go for broke, Gabby delivered the big finish a song like “Don’t Stop Believing” deserves. Idol judges Lionel Richie, Katy Perry and Luke Bryan were as pumped as the audience behind them, but suddenly their cheering turned to surprise as the crowd began to scream and point at someone just out of frame.

Suddenly, the camera panned over, revealing a smiling Steve Perry.

He’d been hiding out in the audience for the better part of the evening, and when Gabby realized who everyone was clapping for she took off running towards him where the two embraced like old friends.

Amazing, right? It gets better.

Steve didn’t just enjoy Gabby’s performance of one of his most iconic songs – he absolutely loved it, heaping high praise on the 18-year-old singer and telling her what every artist who performs a cover has waited their entire career to hear:

“It was the most amazing version I’ve ever heard,” Perry told Barrett. “Swear it. Beautiful, just beautiful. Thank you so much. And I got to meet your parents too – they love you. They love you!” Pointing to the judges he added: “And they love you. And I love you!”

Almost as if they needed proof that this really did happen, American Idol judge Lionel Richie took to Twitter with photos taken backstage, and Gabby even chimed in with a Twitter update of her own.

Thank you American Idol!!! You’ve already made so many of my dreams come true.

Win, lose, or draw, Gabby Barrett has come so much further in mere weeks than many will in a lifetime. That alone, my friends, is proof enough that dreams really do come true. Good luck tonight, Gabby!