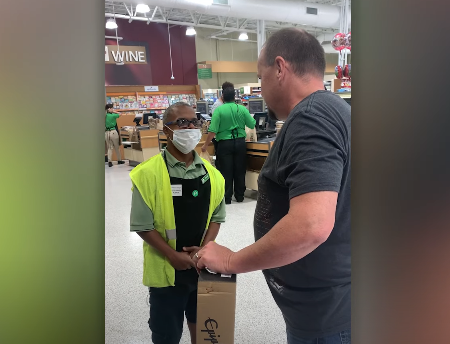 One of the most heartwarming moments during the holiday season is when a shopper surprises a staff from a Floria grocery store with a guitar.

In the video posted online, a 27-year-old Derek Woods can’t contain his emotion, jumping for joy after being gifted with an Epiphone Les Paul Studio LT by musician Chris Glover at the local Publix store in Orlando.

“Are You Kidding Me?” Woods as he held the head of the guitar was in shock.

The two have built a friendship after Chris has been doing lots of his groceries for his family at the local store as his wife, Jennifer, has been battling stage IV cancer.

In the video below, captured by Jennifer, the guitarist can be seen approaching the store staff handling the cardboard packaging containing the Epiphone Les Paul Studio LT. Glover was so happy that he jumps the moment he saw the guitar, he had been saving up so he can buy a new guitar, that’s why he can’t believe the incredible moment.