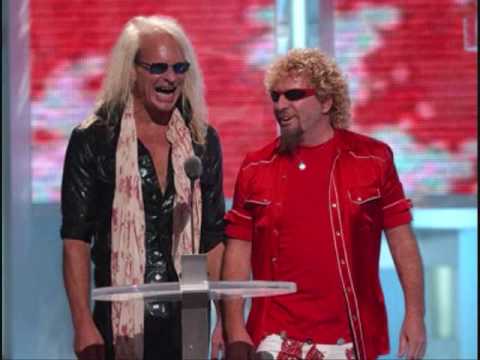 Well, this has always been a particularly harsh question. Who is the best Van Halen, singer? David Lee Roth or Sammy Hagar?

First, both singers had their respective opportunities, and both contributed to the band, dare I say, in equal measure.

And second, I lean towards Sammy Hagar. Why? Sammy has a more “refined” Hard Rock vocalist voice. Musically, the VH with Hagar is a bit more complex, although more “produced”. If it has a flaw, it is that with Sammy the lyrics are much more oriented to sentimental or even idealistic issues, or reflective.

But Diamond Dave is the “Classic” vocalist. And the vocalist in a band is always, invariably, the image of the band and how we perceive it. David Lee Roth’s charisma is undeniable, his wild and acrobatic image, the lyrics sexualized and full of screams and moans. Dave is pure rock and roll, nothing more or less. However, it seems to me that David at some point became more image than music. And it’s reflected in the videos: As the band breaks downplaying, Dave jumps in and poses for the camera. The song doesn’t matter anymore.

The nostalgic and rockers of the 70s and 80s, the golden age of the legendary group Van Halen, considered the most successful hard-rock group in the history of popular music, was lived precisely when David Lee Roth, the quirky “Diamond Dave”, was their vocalist. The same singer who, according to Rolling Stone magazine, is ranked 19th on the list of the 100 greatest metal vocalists of all time.

Sammy Hagar joined Van Halen after David Lee Roth left in 1985 and released four studio records with the band: “5150”, “OU812”, “For Unlawful Carnal Knowledge” and “Balance”, before they were partially disbanded afterward.

After teaming up with Roth on the seemingly unlikely co-headlining “Song For Song, the Heavyweight Rock and Roll Champions” in the summer of 2002, Hagar returned to the Van Halen fold from 2003 to 2005. Asked about his alleged “rivalry” with Roth in the Confessional story in Planet Rock magazine, Hagar said, “It wasn’t even a blip on my radar.” He added: “Van Halen couldn’t have made it without him.”

Sammy was a blatant transgressor of rock “fashion”; Miami Vice linen suits, gym pants (!) that didn’t envy the Hammer pants… No tight leggings, no black leather, no animal print. Visually, Sammy was “lost” in the music … BUT YOU LISTENED. You weren’t distracted by any sudden appearance of Dave’s crotch or rear-facing the camera.

Van Halen with Sammy Hagar is the much better choice in terms of singing chops, even though it’s Dave’s that really makes us rock with songs such as “Panama,” “Jump,” and “Hot For Teacher” brings to mind the early teenage years: while “Dreams” “When It’s Love,” and “Summer Nights” Van Halen music became more serious, rising from Hagar’s low-key and more keyboards to Eddie’s last “tapping” (RIP). David Lee Roth is pure energy, Sammy Hagar is a pleasure from start to finish. And they are both hymns, why not? From different times, in the band, in the world, and in myself.

Tell us what you think, Hagar or Roth?