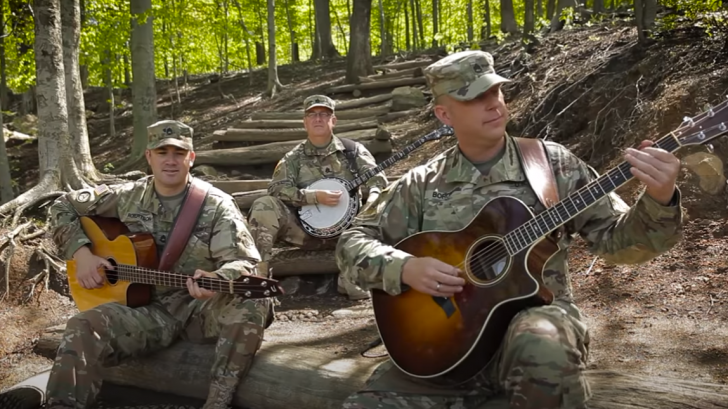 The Six-String Soldiers are a part of the US Army Field Band that performs modern American folk music styles, primarily bluegrass and country, as well as acoustic renditions of well-known tunes.

Although this band is entirely composed of strings and camouflage, they did let drummer-turned-guitarist Sgt. First Class Glenn Robertson to keep one drum.

“That’s why I keep the flowers on it, keeps me rooted,” Robertson said.

All of the band members are in the military on active duty and have a musical objective.

“We’re here to tell our stories as soldiers,” Robertson said. “We’re here to connect with our veterans and probably most importantly to hear their stories. Because what we do is so broken down they really have the opportunity to interact with us while we’re playing a show.”

The Six String Soldiers’ cover of Pink Floyd’s “Wish You Were Here” is one of our top favorites. The video’s ending is priceless. Make sure to finish the video. We sincerely appreciate their message because I am a veteran of the military. It’s a heartfelt statement. Experience their music below: