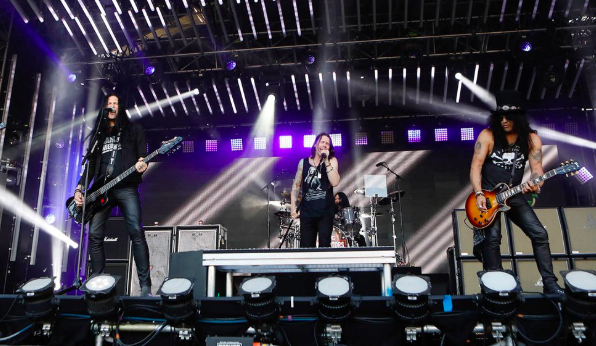 Slash and Myles Kennedy & the Conspirators blew everyone’s minds with their gritty performance on Jimmy Kimmel Live. The Guns N’ Roses guitarist alongside Kennedy were musical guests on the popular talk show. Their performance of their bluesy single “Mind Your Manners” was definitely high-energy and reminded everybody watching that  “what you seek is what you are.”

Their appearance is in promotion of their upcoming album Living the Dream,  due out on September 21.

Slash releasing an album with Myles Kennedy doesn’t mean he’s out of Guns N’ Roses, rather, he will just be taking a month-long break from the iconic rock band to tour with his other band for their North American tour in support of Living the Dream.

In an interview about Mind Your Manners, Slash has said,

“I wrote this song on the spot to help the band get up and running once we got back in the studio this past January. It’s just a go-for-it type of song. Pretty straightforward rock and fun to play.”

“Mind Your Manners was something I didn’t hear until the guys had started jamming together. It’s a cool, up-tempo sort of thing and I knew immediately it would have its own place on this record. Lyrically, it’s about how when things are going well there always tends to be someone who tries to rain on your parade and knock you down. You have to keep people like that in check and not let them get to you.”

The band played two songs on Kimmel, Driving Rain aside from Mind Your Manners, both of which are included on their upcoming album Living The Dream.

Check out the Slash ft. Myles Kennedy & the Conspirators’ full performance below: