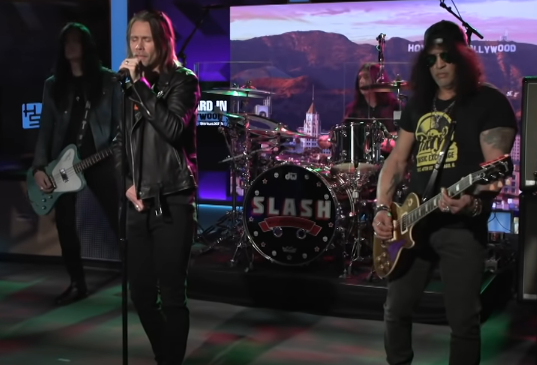 Slash, along with Myles Kennedy and The Conspirators, have performed a powerful live version of Elton John’s classic “Rocket Man”, originally released in 1972.

On February 8, during a show in Portland, Oregon, the band began their “River Is Rising” tour, presenting their new album, ‘4’, and leaving us this version, of great caliber and musical quality. The guitarist, who recently announced that he would stop playing Guns N’ Roses covers on tour with his alternative project, surprised those present with a most unexpected show, highlighting, above all, this brilliant tribute to Elton John.

During their appearance in a recent set at the SiriusXM Garage for The Howard Stern Show, Slash featuring Myles Kennedy and The Conspirators performed their latest single, “The River Is Rising” before doing a cover of the Elton John classic, “Rocket Man.”

The new album titled “4” was released on February 11, 2022. A vibrant rock work that presents its first single “The River Is Rising”, a theme that refers to bad ideas and the people who promote them, those who brainwash or indoctrinate others to convince them to believe or carry out some kind of dangerous idea.