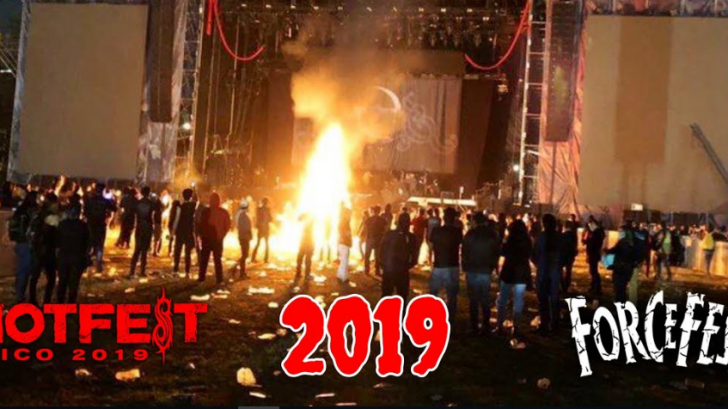 Slipknot didn’t show up at the Mexico City edition of their Knotfest package tour last November 30, due to a broken security banner leading to a fan to cause a stampede, according to reports.

The local media confirms that the fence was torn down by one of the audience during the Behemoth’s set, there was no time to repair the damage to continue the show. Resulting in Slipknot and Evanescence – canceling their appearance because it was no longer safe to perform.

According to social media reports, some fans rushed towards the stage and vandalized the equipment on the area, a video shows that Evanescence drummer Will Hunt’s was set to fire. There are also other scenes and various forms of vandalism. Luckily, no one was injured.

Watch the footage below:

“Because of a broken barricade and failed attempts to fix it, Slipknot were forced to cancel our performance last night,” the band said in a statement later. “Safety – especially the safety of our fans and fellow bands – is priority number one. We apologize profusely and hope you all understand. If anything were to happen to any of you, we wouldn’t forgive ourselves. Also, If we could have fixed the barricade correctly, we would have gone on stage. Again, we hope you all understand and we will try to make it up to you as soon as we can.”

“We are heartbroken we didn’t get to play for you tonight, Mexico City,” Evanescence said. “Your safety, your life is more important than any show! We love you and we will be back soon, that’s a promise.”

Evanescence's and Slipknot's sets at #Knotfest Mexico were cancelled last night due to problems with the barricades. People attending the festival proceeded to throw things on stage after the announcement of the cancellation and cause serious damage to Evanescence's equipment.

Live Talent’s event manager claims that there was already unlawful behavior taking place before the barrier was forcefully destroyed:

“Haven’t you heard of armed robberies inside the festival?” one fan asked Slipknot. “Because at some point during the night, people could access the venue without showing a ticket… the cashless fraud that left many people without money on their bracelets? I wish you could take a look at the real posts of the people who attended the event.”