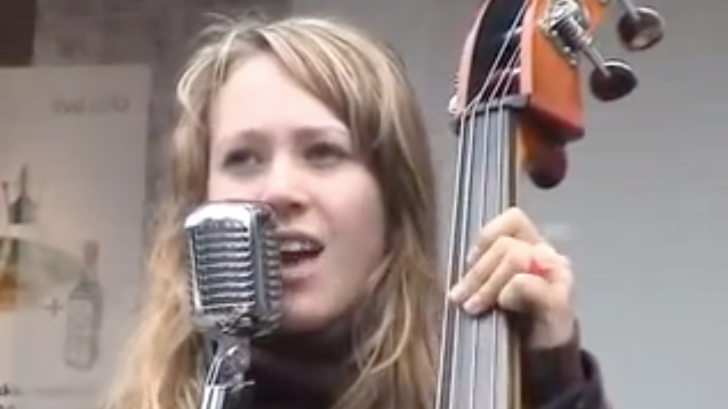 The Father and daughter duo performed an amazing cover of “Subterranean Homesick Blues” back in 2007. Usually a one man band, Gee Gee Kettel was joined with his daughter Soluna Samay. She sings and plays the double bass with the effortlessness of someone who was born to do it. The two musicians were at the Notodden Blues Festival in Norway and found the cover to be the perfect fit.

The original Bob Dylan track was released on March 8, 1965 off his brilliant Bringing It All Back Home album. The song touches on most parts of society and jumps from one cultural reference to another. From social inequality, to drug use, violent policing, and the fight against the man. The song can almost be the entire definition of antidisestablishmentarianism. Try rhyming that word in “Subterranean Homesick Blues!”

Back to the real stars of the show…

According to his Facebook and his gorgeous biographical post Gee Gee Kettel started traveling the world as a professional busker starting in 1980. He was a one man band from the start. He got around in an old Citroen van that he converted into his “rolling home.” Gee Gee Kettel is more or less a gypsy- in the most romantic and musical way. He loves what he does and he makes other people happy doing it too. What’s not to love!?

In 1990 he and his partner had Soluna Samay, in Guatemala, Mexico. She grew up on the road traveling with her parents. She says about this experience,

“My Swiss mother has been an artisan for many years and travelled all over the world at a young age selling her own jewelry. My father, the German one-man-band Gee Gee Kettel, who has been a professional busker for over 30 years, introduced me to music at an early age.
By age 4 I was passing the hat around for him, by age 5 I joined him on the drums, by age 7 I was singing along, by age 10 I picked up the electric bass and a few years ago I started playing the double bass.”

Johnny’s in the basement
Mixing up the medicine
I’m on the pavement
Thinking about the government
The man in the trench coat
Badge out, laid off
Says he’s got a bad cough
Wants to get it paid off
Look out kid
It’s somethin’ you did
God knows when
But you’re doing it again
You better duck down the alley way
Lookin’ for a new friend
A man in the coonskin cap, in the pig pen
Wants eleven dollar bills, you only got ten