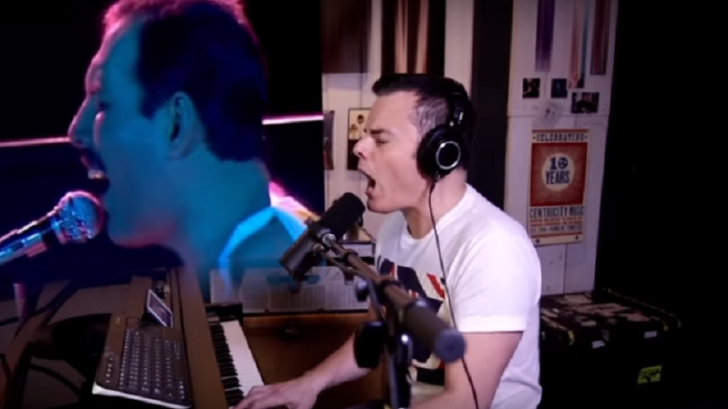 Marc Martel was part of the official tribute project The Queen Extravaganza back in 2012 and 2015. And for good reason, he sounds so much like frontman Freddie Mercury. Of course it goes without saying that it’s not 100% accurate simply because Freddie is Freddie. It’s just that with so many other musicians who try to cover Queen songs, he’s the one that always does justice to every single one of them.

He’s the total package, by the way. Not only are his covers eerily accurate, he also looks a lot like Freddie! Just look at that side view and tell us we’re imagining things.

“People would compare me to Freddie Mercury incessantly. It just became this joke after awhile: “I wonder how many people are gonna tell me I sound like Freddie Mercury after this show?” Usually, it was at least five people who would come up to me and say, “Do you know who you remind me of?” And I’d say, “Yeah, I know exactly who I remind you of!” – Marc Martel

In 2017, he joined the Ultimate Queen Celebration and just this year, he lent his voice to the box-office biopic “Bohemian Rhapsody.” That is just fitting because he’s the one with a vocal performance that closely resembles that of Freddie.

“They hired me to do some of the singing in the movie and give the audience an immersive experience and not be able to tell where the singing is coming from. It is to make the audience believe they are really watching Freddie Mercury sing.” – Marc Martel

And if you’re still skeptical, just watch and listen to this mashup from YouTube user DKGCustom. From the looks to his voice, it’s like Freddie was reincarnated. And it baffles us so that Queen hasn’t invited him to play with the rest of the members.

We have nothing against Adam Lambert because we’re pretty sure he’s doing a fine job fronting Queen but if we’re honest, Marc Martel deserves a lot of appreciation too.