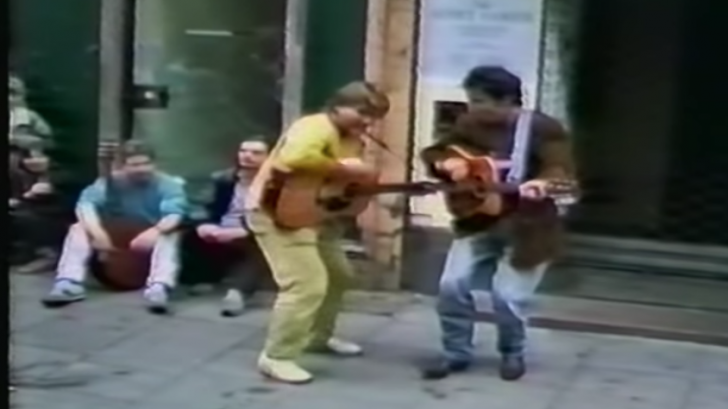 Wow, wow, wow. What it must have been like to walk on the streets of Copenhagen and realize that the street performer singing is THE actual Bruce Springsteen- is beyond imagination. He belts into all his hits at the time (1988): “I’m On Fire,” “Into The River,” and “Dancing In The Dark.” This was probably his best performance ever. A real musician is concerned with his work, his message, and the people intended to feel the impact of those things. Springsteen proved his magnetism when he joined the busker on the street to perform his hits to a surmountingly huge crowd. My heart wants to explode when I watch this video. You can hear the entire street singing along to “OoOoh, I’m On Fire.” They sound like a choir alongside the icon.This is what magic moments are made of- seriously.

Not once does Springsteen try to upstage or absorb any attention away from the sidewalk performer he barely met. The street musician can barely contain his happiness as he jumps around joyously. You can hear people shocked to turn and see the “Born In The USA,” songwriter. They squeal and yell “Oh My God!” As the camera pulls away to show the crowd everyone is awe- struck, mostly silent besides the OMG’s. People are crammed as far as the eye can see. Springsteen is so genuine and down to earth it would have been easy to assume he was another passer by- except he was one of the most famous musicians in the world at the time (still is).Then rock legend Springsteen proceeds to shake hands and hug the audience. What a class act.