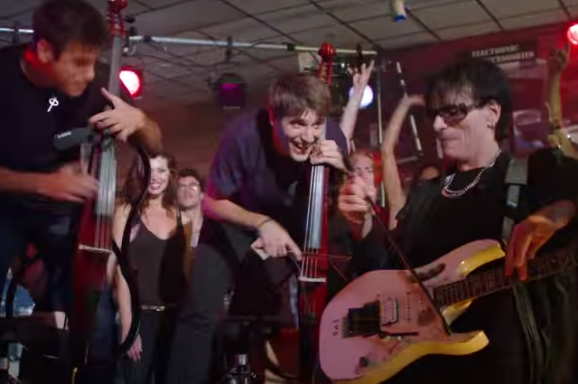 Imagine going into a random Guitar Center and you’re treated to this one of a kind instrumental shredding with cellos and an electric guitar of AC/DC’s classic “Highway to Hell”… Now imagine that guitarist is Guitar World’s 10th “Greatest Guitarist” Steve Vai being almost outdone by two young cool and insanely talented Croatian cellists… now that’s one heck of a random concert at a Guitar Center store.

Well, in 2013, that’s exactly what happened. Instrumental duo 2Cellos spontanteously teamed up with esteemed rock guitarist Steve Vai to perform an awesome rendition of AC/DC’s “Highway to Hell” for a music video. The two young cellists Luka Sulic and Stjepan Hauser hail from Croatia and have been literally shredding their cello bow to bits as they rock super hard to the timeless AC/DC classic.

The music video featured Steve Vai hosting a signing event at the Guitar Center music store, when the 2Cellos started stealing the show. At first Steve Vai was pissed he’s losing his audience and fans but then takes his Ibanez guitar and joins in the jam session that later on turns into a rock out party inside the store.

Check it out below :