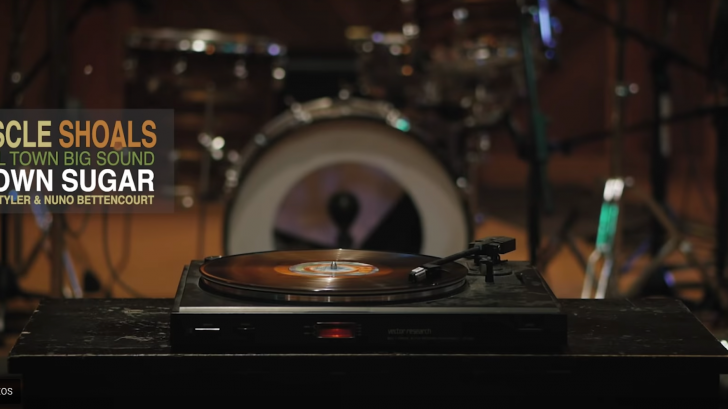 They take this Stones classic to the next level

TODAY! Brown Sugar, performed and produced by Steven Tyler and myself was released exclusively by Rolling Stone. https://www.rollingstone.com/music/music-news/hear-steven-tylers-rollicking-brown-sugar-cover-for-all-star-muscle-shoals-comp-708034/ Go and check it out! You don't get many chances in life, or in your career, to travel back in time like we just did in Muscle Shoals. Most historic places you visit, you can physically touch. But while recording Brown Sugar in Muscle Shoals, WE, were the ones being touched. You could feel the spirit, the ghosts, but more importantly… emotion… deep down. ST said it best…we decided to go on a pilgrimage to Muscle Shoals. I mean where else are you gonna go to re-record the legendary Rolling Stones classic, Brown Sugar. We figured if the Stones themselves, along with Aretha, Wilson Picket, Dylan, Little Richard and so many others tapped into the swampy mojo of the Shoals, then that’s where the magic is. We knew we wanted to respect and pay homage to the original version, but we also dared ourselves to make it our own. With help from members of the original swampers, fame gang and a band of talented southern gypsies, we walked out with a Heart and Soul filled Brown Sugar. Brown Sugar is just one song on an amazing compilation called @smalltownbigsound Other artists include… Alicia Keys, Kid Rock, Chris Stapleton, Willie Nelson, Leanne Womack, Grace Potter, Alison Krauss and even more! Can’t wait to share! Swipe Left for full video! #atlantisisrising

The album has an official YouTube channel which features footage of Tyler recording “Brown Sugar,” and talking about what makes Muscle Shoals a special place to make music, saying

“To be here and record in the midst of the vibe and the music that was created here is what I came here for.”

The late founder of FAME Studios Rick Hall’s son Rodney Hall was responsible for making this tribute album a possibility.

Part of the money raised from sales of the album will benefit the Grammy Foundation and the Muscle Shoals Music Foundation.