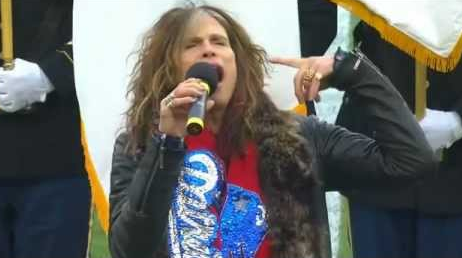 The stadium was packed, with all five senses on the voice of Steven Tyler, chosen from hundreds of artists to sing the popular United States anthem.

It is known that the Super Bowl is not just another meeting between sporting events in the United States. It is the last date of the National Football League.

Its importance requires that an important musical figure join the stadium to sing the anthem before the players get fully into the game. María Carey, Christina Aguilera, Whitney Houston, Beyoncé, Backstreet Boys, are just some of those who have already sung the verses of the national anthem.

Holding their breath, the thousands of fans watched in perplexity as to the frontman of the rock band Aerosmith rose and rose to a point impossible even for him, accustomed to screaming and the rock fury of the most popular songs of his band.

At the top of his lungs, Steven Tyler sang The Star-Spangled Banner in a succession of screeches until his throat did not give for more and he was speechless. But it does not end there. Between boos, the Aerosmith continued to the end, where he mixed up the words of some of the verses of the classic song.