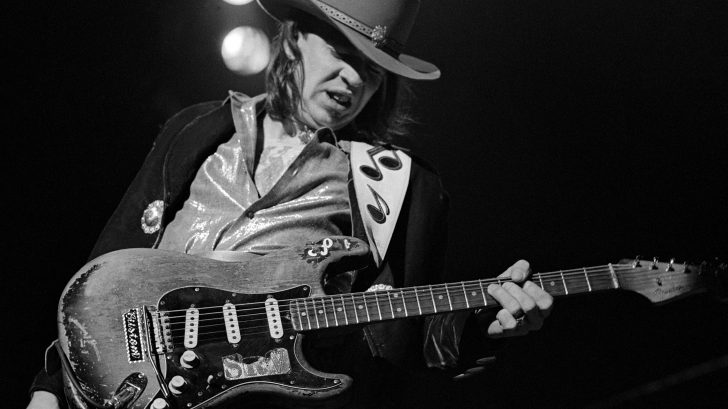 Stevie Ray Vaughan has been one of the greatest Blues guitarists of all time, and was one of the main referents of Electric Blues in the 80’s. Stevie mixed the purest essences of the great blues guitarists, and the grit and virtuosity of his idol Jimi Hendrix. But he didn’t limit himself purely to this genre, as he also played other genres like Rock and Roll, or Jazz, and fusion genres like Blues/Rock, and Jazz/Blues. Below are SRV’s Favorite Guitarists:

Stevie Ray Vaughan was a powerful guitarist who pioneered a new style of guitar playing in the era he dominated, but he, too, had inspirations. Jimmie, his brother, was one of the guys who left an impression on him. In an interview in 1988, Vaughan lavished admiration on his brother.

“With that kind of an influence as your big brother it’s real easy to get into playing,” he said. “I saw how much fun he was having with it. Also I saw how dedicated he was to it. It gave me a lot of inspiration. When he would leave, partially because he was big brother and you’re not supposed to touch big brother’s stuff. Also partly because he told me not to touch his guitar… ahh, I did.”

B.B. King was also another guitarist he idolized, albeit, in this case, the admiration was mutual. King, who collaborated with Vaughan, thought the younger player had potential.

“Stevie had many ways of showing you that he had not only talent but he had the feel for playing Blues,” King admitted.”His hands seemed to be flawless the way he moved with it.”

SRV also enjoyed a jamming session with Albert King, and the resulting product had growl, fury, and ferocious perfection. Vaughan admired King’s guitar skills, as evidenced by the comment below.

“They’re the pioneers and the innovators and they deserve respect for that,” Vaughan recalled. “Listening to all the great records by Albert King and Albert Collins, Otis Rush, B.B. King. There’s millions of records we could talk about and each one of them is unbelievable in its own right.”

Now there’s Lonnie Mack, who pioneered a more raucous style of guitar accuracy and polish. The tunes were full of excitement and flair, instilling a sense of inventiveness in the young developing guitarist.

“It was the first album that I ever bought. He turned me on to the guy and let me know who he was. I went straight and bought the record. Also was one of the first things that I ever really tried to learn, which is pretty hard thing to learn. But it worked out,” Stevie Ray Vaughan said.

Vaughan’s inspirations ranged from the origins of rock through a period that occurred before his turn in this earthly existence. Muddy Waters was another influential figure on the young Vaughan. Waters’ penetrating blues music was crucial not just in how it was delivered, but also in casting a shadow on the young, passionate performer. Vaughan never would put oneself in the same category as Waters:

Finally, there was Howlin’ Wolf, a young artist who made an impact on the Vaughan household, especially Jimmie Vaughan, inspiring the older brother to pass on his knowledge to his little brother.

“When we were first startin’ off we had some friends of the family show us stuff,” Vaughan admitted in 1989. “Like one guy played with Ray Sharpe and the Razor Blades. So right off the bat we were playin’ “Linda Lu” (a Ray Sharpe hit), Jimmy Reed. Really hip stuff for little kids.”

The strident, passionate riffs blended into an unique thump, reminiscent of a mason laying down concrete.