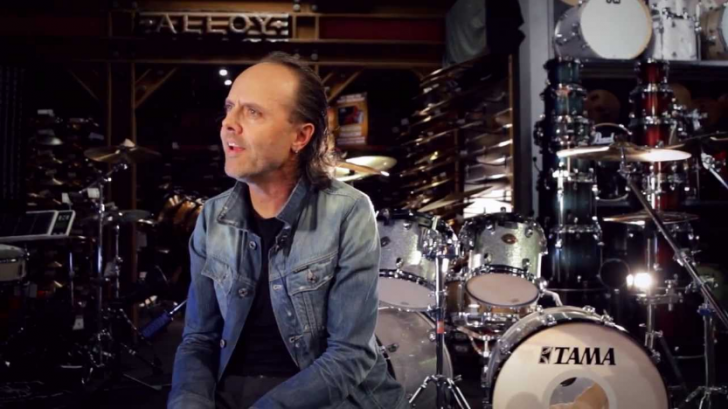 Lars Ulrich’s quarantine life during the pandemic has been something great for him as he spends more time with his wife and kids. In the past few days, the drummer shared a video of both sons, Myles and Layne, covering the Beatles’ classic, “Eleanor Rigby.”

Metallica were supposed to play South America this spring and headlining several summer festivals this summer, but those plans were changed due to the ongoing global health crisis.

The next scheduled date is their own All Within My Hands Helping Hands Concert and Auction in San Francisco, and is anticipated to take place on September 12th, but will still depend on the ongoing situation around the globe.

Lars Ulrich answered quarantined questions from Rolling Stone, telling that he and his family are finding some creative ways to pass the time.

What are you doing with your unexpected time at home?

I’m trying to stay healthy and sane and to be as productive as possible. I’m trying to stay more physically active than I was a few months ago, doing workouts and playing, instead of drifting into the couch. It keeps you mentally feeling better.

Since you’ve been keeping busy, what have you been doing for leisure?

Other than just exploring music and connecting with the kids through music, we’ve been having communal movie nights where one of us picks a movie and the rest of the contingency is not allowed to veto it. That way we don’t sit there and get these half-hour discussions about what movie we’re going to see. I’ve tried to pick some movies that made a difference to me over the years, and the kids and [my wife] Jess are doing the same. We do have these maybe five or six times a week.

What are some of the movies you’ve been watching?

I showed a couple of Thomas Vinterberg films, The Celebration and Submarino. And I showed the first film that really had an impact on me, when I was 16, called Midnight Express. Jess has showed movies like Y Tu Mamá También, which the kid loved, and Amalie, the French film. And my sons have been picking some crazy, cool shit. Myles picked a Godard movie, Breathless. And Layne picked an Ingmar Bergman film, The Seventh Seal. We’ve also watched Sling Blade, The Diving Bell and the Butterfly and Platoon, which was crazy. Platoon has aged well. I hadn’t seen it since it came out. And we were stunned at, I guess, its relevance still and how it still plays.

Have you been watching much TV?

I don’t really watch TV, but Jimmy Kimmel has become a constant for us. He is an incredible voice right now. We tape them every night and watch two or three episodes in a row in a day. I can’t deal with the 24-hour news stations right now. It’s just too overwhelming. So Kimmel is the one TV thing that I check in with. His tone just feels spot-on with the way that the temperature is in the world right now. What he’s saying and how humble and sincere and still funny, his observations and so on, feel so strong with the times.

What else are you doing as a family?

We’re just trying to connect every day and talk about how we can all make a difference or check in on somebody or do something through a charitable organization. We talk about what we can do to feel every day like we’re contributing on some level. I don’t think it’s how much you contribute, it’s the fact that you contribute at any level, so anything north of not contributing should be applauded. We try to adhere to that.

What music gets played the most in the Ulrich household?

There’s a fair amount of Radiohead playing throughout the house. Radiohead started doing something, kind of like what Metallica is doing, where they’re streaming concerts so we’ve got a house of Radiohead fans.

What music have you been turning to personally?

I would say that the Fiona Apple album [Fetch the Bolt Cutters] is just stunning. The first day it came out a week ago, I think I sat and listened to it for three, four hours straight and was reading the lyrics. To be honest with you, I was kind of taken aback by how unusual and brilliant it is, because it’s unconventional. Every few years, there’s a record that comes out and has a different sound. I think the last Arctic Monkeys from two years ago [Tranquility Base Hotel & Casino] also had a little bit of that same effect, where it’s just not what you expect and then you hear it and just go, “Wow, it is still possible to do something different musically that feels unique, fresh, or unexpected.” So I would say the Fiona Apple album definitely. I also love Ed O’Brien’s album. And his performance on Kimmel, a week ago, we’ve been watching that quite a bit.

Other than that, I guess you find you reach out to a lot of your old friends [musically], also. Probably the music that I’ve listened to the most in the last two or three months is Rage Against the Machine. Am I the only one who thinks that their music just grows more and more relevant every day? [Laughs]. It connects more and more to what’s going on in the world. It just feels like all four of those albums were recorded last week. And when I’m doing my sad little exercises, I’ll put them on and go, like, “Holy fuck,” and just hear something in “Calm Like a Bomb” or “Sleep Now in the Fire” or “Bombtrack,” and go, “Seriously? What the fuck? Where does this even come from?” So Rage Against the Machine is always a reliable friend.

We were looking forward to that tour, but you know better than anybody that all touring is up in the air.

We were gonna go and join in El Paso for the first show. I was actually at the last show that they played in L.A., in 2011, so Jess and I and the boys were going to check out the next show. Whenever they do it, we’ll be there.

Is there anything else you want to say to your fans right now?

I’m really just hoping that everybody all over the world is healthy and that their loved ones and everybody are sound and that everybody is doing well under the circumstances. If there’s one thing that I’m feeling, it’s that the world is getting smaller and smaller, and the community is getting more and more connected. So I’m very appreciative of the fact that Metallica’s music makes a difference in these difficult times.

The feedback we’re getting from #MetallicaMondays, where we’re streaming a show every week, gives people something to look forward and it creates these small viewing parties where everybody is connected and sharing their thoughts. So the fact that music can make a difference and help people through these unprecedented times is obviously awesome. And at the same time, we’re trying to figure out how we can come back and play and under what circumstances we’ll be facing. And if we’re going to be sitting here for a while, we’re figuring out how to connect musically and start firing up the creative process again under these new realities.