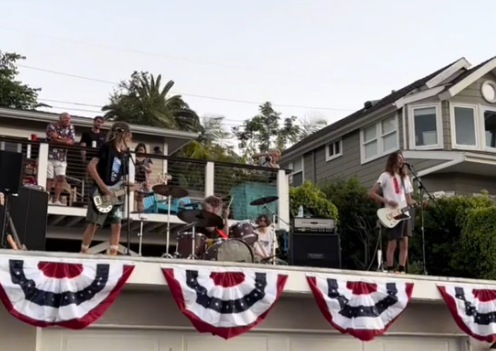 This one really appeals to us because over the July 4 holiday, Shane Hawkins, the teenage son of late Foo Fighters drummer Taylor Hawkins, honored his dad by singing “My Hero” by the Foo Fighters with a local Laguna Beach band called The Alive at a neighborhood block party.

Below, you can see a number of TikTok clips of the rendition that @lagtownsfinest uploaded, which feature Shane’s drumming in various sections of the song. According to one of the video clips, there was “not a dry eye in the crowd” as Shane dedicated the tune to Taylor Hawkins during the performance, as was previously mentioned.

Some of the gathering local fans began to mosh while the song played, giving the performance the impression of having occurred on the roof of a garage.

The Alive also made the following post to their Instagram account:“Thanks to the Laguna Beach community, police (for not shutting us down) , @spliffriff_ and the @marcusskenderian family. Special thanks to @shane_hawkins_22 for sitting in.”

Taylor Hawkins, 50, passed away in March. This September, the drummer will be honored at two concerts by the Foo Fighters and the Hawkins Family in London and Los Angeles.

@lagtownsfinest Replying to @amm0195 recording the whole song took a back seat to watching it live and soaking up the special moment ? @foofightersofficial @jazz5504 ♬ original sound – Lagtownsfinest