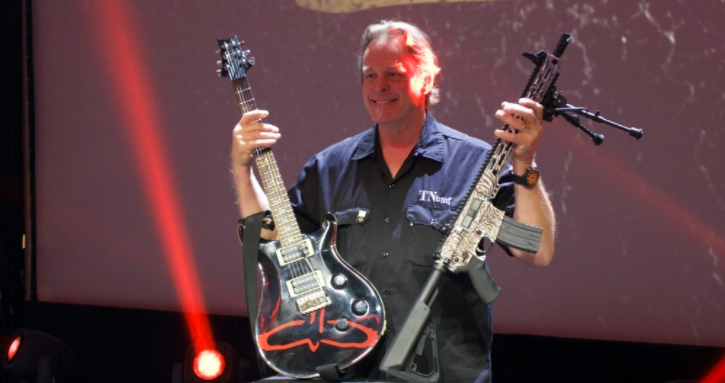 Ted Nugent has long been facing controversy over his political views and inflammatory comments. He continues doing so by speaking harshly against the Parkland shooting survivors during an interview on the conservative radio program “The Joe Pags Show”.

“The dumbing down of America is manifested in the culture deprivation of our academia that have taught these kids the lies, media that have prodded and encouraged and provided these kids lies,” Nugent said.

“I really feel sorry for them because it’s not only ignorant and dangerously stupid, but it’s soulless. To attack the good, law-abiding families of America when well-known, predictable murderers commit these horrors is deep in the category of soulless. These poor children, I’m afraid to say this and it hurts me to say this, but the evidence is irrefutable: They have no soul”, he adds.

“The level of ignorance goes beyond stupidity. Again, the National Rifle Association are a bunch of American families who have a voice to stand up for our God-given, Constitutionally-guaranteed right to keep and bear arms. We have no blood on our hands. No NRA member has ever been involved in any mass shootings at all; in fact, the National Rifle Association is the lone organization that has taught firearm safety in schools, and for law enforcement, and for military, and for children’s organizations and family organizations around the country for 100 years. So once again, this poor, pathetic individual is a liar.”

The rock musician is now facing massive backlash online for his comments. Students from the Marjory Stoneman Douglas High School have tweeted:

it’s funny how the NRA argues that guns aren’t the issue, it’s bullying that is. Yet literally a NRA board member is being a 5 year old acting like a bully to me and all of the students at douglas. https://t.co/9Upcqdr8e4

If only he saw all the tears.

If only he had to look into the eyes I’ve looked into.

If only he saw what this did to all of us…

And here the NRA is, receiving more fear-based donations than ever.

Talk about ‘no soul.’ This guy better apologize. Seriously. https://t.co/NHL4yr5r4M

Ted Nugent you are a moron. I have been very polite, but not this time. Your comments and the stupidity behind them are delusional and further proof that the NRA arguments have failed and all that you have left is to

Ironically, in 2017, following an attack on a baseball practice on a ballfield in Northern Nugent claimed to be “more selective with my rants and in my words.”