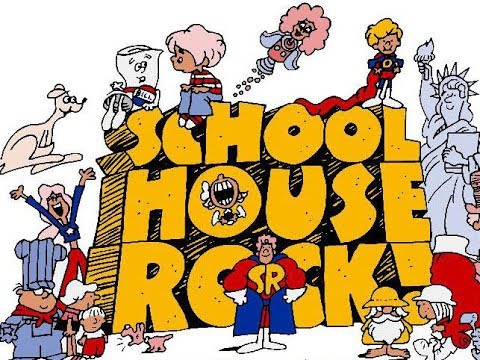 Several other school videos had an impact on Schoolhouse Rock tunes. Every Saturday since the 70s, youngsters have assembled throughout their TV to appreciate cartoons while learning nearly everything from science and math to civics and history.

Released in 1973 written by Bob Dorough and performed by Terry Morel and Jack Sheldon debuting in the series. This song is about the perspective of a train engineer that teaches conjunctions.

The song was performed by Jack Sheldon, with remarks from Sheldon’s son John as the son studying the method. It is concerning whence a bill shifts to law, how it is passed to Congress, and how it can be declined, etc.

Interjections! is a Grammar tune that explains interjections. The song has three stories, a child, a woman, and a group of football fans.

Lolly is a grammar character who made an appearance in this tune. The song explains adverbs.

Performed by Lynn Ahrens that teaches the US Constitution. The chorus part is mostly the US Consitution Preamble.

Three is a Magic Number

Three is a Magic Number is a tune from Multiplication Rock! It teaches over multiplying by three.

A Noun is a Person, Place, or Thing

“A Noun is a Person, Place or Thing” is a tune released in Schoolhouse Rock!. The song instructs kids about nouns.

“Unpack Your Adjectives” is issued via Schoolhouse Rock!. The tune teaches the adjectives as the title suggests.

The Shot Heard ‘Round the World

The Shot Heard Round the World is a turn from “America Rock!”. Performed by Bob Dorough teaching the American Revolution.

This song is a part of Science Rock! It teaches how electricity works, and how and when it was discovered, performed by Zachary Sanders.