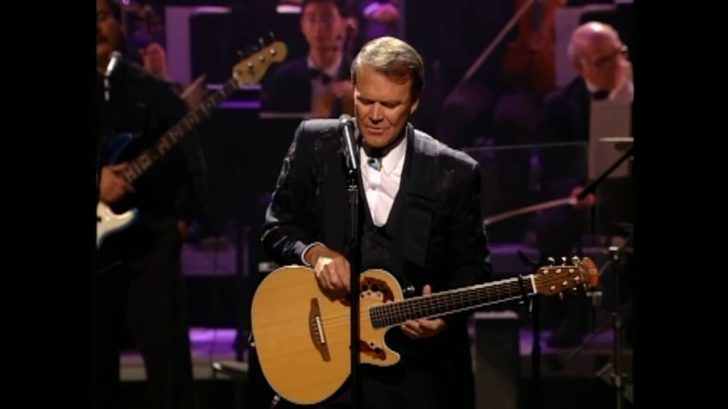 Some musicians are inextricably linked to a certain time period in music history. Perhaps the best example is Glen Campbell. Not only is his work associated with the heyday of country music, but it also gave the genre vitality far into the 1970s.

We look back at the 6 Most Important Songs In Glen Campbell’s Career:

Soon after leaving The Champs, Glen Campbell’s first solo song was issued in 1961. It didn’t take long for the seasoned session musician to be recruited to Crest Records, who in May of that same year produced “Turn Around, Look at Me.”

The sweeping, string-driven single enjoyed a minor amount of success, peaking at number 62 on the Hot 100. The song became popular, nevertheless, with The Vogues’ later rendition, which reached at No. 7.

In 1967, Campbell reached new heights. He recorded “Burning Bridges” with Al De Lory after almost getting fired from Capitol. Due to the success of the Top 20 single, Glen had another smash with the John Hartford-penned song “Gentle On My Mind,” which won Campbell the Grammy for Best Country & Western Solo Vocal Performance.

Jimmy Webb’s song was recorded with assistance from Campbell’s previous Wrecking Crew bandmates and appears on the eponymous album. Along with songs like “Hey Jude” and “Sittin’ On The Dock of The Bay” by Otis Redding, the delicate effort peaked at number three on the US pop chart. It topped the American country music chart and stayed in the Top 100 for at least 15 weeks.

Rhinestone Cowboy from 1972 being the most significant song of his career. It reached at number one and went on to become Campbell’s most popular single, initially selling over 2 million copies. Right now, it very well holds the title of most famous Americana song of all time.

The song captures a longing for small-town America that permeates many of Campbell’s best-known tunes. Evidently, ‘Southern Nights’ was his favorite song out of every one he put out over his long tenure. It’s undoubtedly one of his sexiest singles to date.

In 2013, Campbell recorded the song that would become his farewell. For the song “I’m Not Gonna Miss You,” he reconnected with the legendary Wrecking Crew. Glen Campbell: I’ll Be Me, a 2014 documentary, featured footage of the recording process. Campbell was diagnosed with Alzheimer’s disease two years later. He passed away in August 2017 at the age of 81.