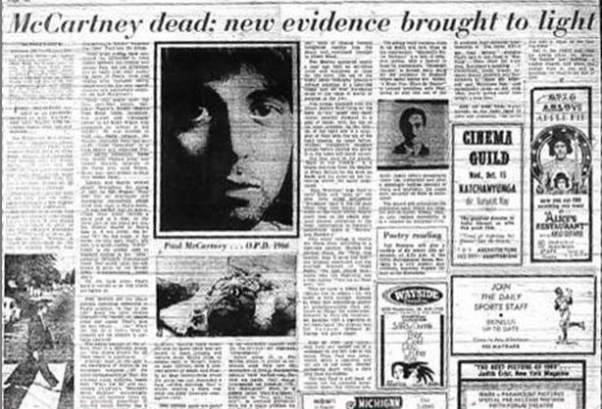 The theory was this – Paul died and was replaced by someone who looks exactly like him.

The notion was that he died in a car crash, and if you love great conspiracy theory then all that happens during the Sergeant Pepper time was just a gigantic joke on the part of the Beatles.

Let’s look at the evidence that Paul really died in 1966 and see how absurd they are:

The most infamous evidence that Paul was replaced by a look-alike is a hidden message from the end of “Strawberry Fields Forever.”

This might be one of the most famous album covers in the history of music, but the iconic album cover features what appears to be funeral imagery.

The Replacement Was Introduced on ‘Sgt. Peppers’

Yeah, that’s about it. All around the Sgt. Peppers’s time was just a huge joke.

He Announces It Himself In Magical Mystery Tour That He’s In Fact Dead.

No one knows exactly how Paul died (or everything was just conspiracies). After touring, Beatles got themselves a stand-in Paul which led them to stop touring and just made studio albums.