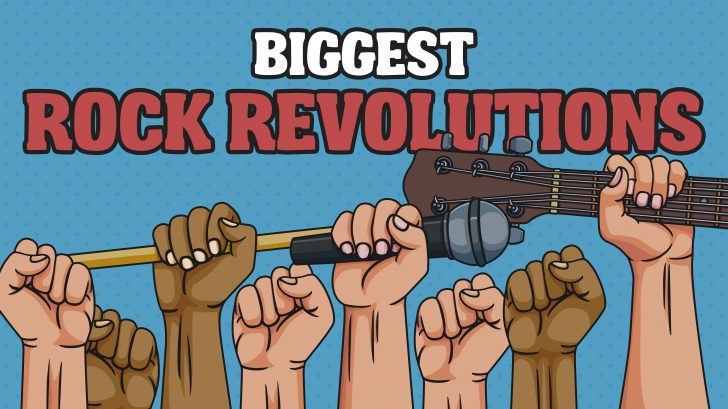 Someone Had To Do It

In the nature of Rock Music, it has sparked some revolutions since it began, though they weren’t that universal; rock blooms new things that would impact the society. From Surf music to Folk Rock, through Rock to Heavy Metal and whatever makes Alternative stuff Rock, there are little revolutions made out of them and keeps coming over the decades.

Rock music is too well established, and it has made some of the biggest musical revolutions there is — and even inspire a political revolution in the process.

Some of the worst revolutions were technology advancement — it has made any talentless, and low-life hack into something we call STARS today – and the cost was less than nothing at all.

Gladly we still have the 60’s and ‘70’s and it will only happen once in a lifetime, and most of us were lucky enough to be along for the ride.

The list below comes with “The Biggest Musical Revolutions In Rock N’ Roll History.”

The scene made famous by Kyuss  — it was much like the 60s and music was redefined again. It has built ideas and emotions — and as we all know the word, Stoner, of course, a term for a marijuana user. Much like the psychedelic scene Stoner rock songs could be in a dreamy & trippy, relaxed & fun, slow & heavy or deep & mystical mindset. It gave a wide variety of emotions — by their attitudes, lyrical themes, emotions they represent, and the musical way they choose to express these emotions.

The Stoner scene was not only limited in the US but it has influenced the UK as well. The global attraction of this music was increasing and created some prolific bands such as Dozer, El Caco, and Spiritual Beggars, the Purple, Atomic Rooster, and Zeppelin.

Janis Joplin was the finest white blues singer of her generation. Through her music, as a woman of her era created the soundtrack of social progress. She was rough and at the same time was vulnerable and charismatic, and she paved the way for countless women in rock.

Clapton xenophobic rant was heard in 1976 by a fan and was enraged about it — and that was also the time when Rock Against Racism was formed and it had helped destroy the National Front.

The Beatles ‘Did Not Spark A Musical Revolution In America’

Music historians have long argued that the American sound came out of Memphis from the likes of Elvis Presley, Johnny Cash, and Jerry Lee Lewis. It was never the Beatles as they were given too much credit for the musical revolution which started in the US in 1964.