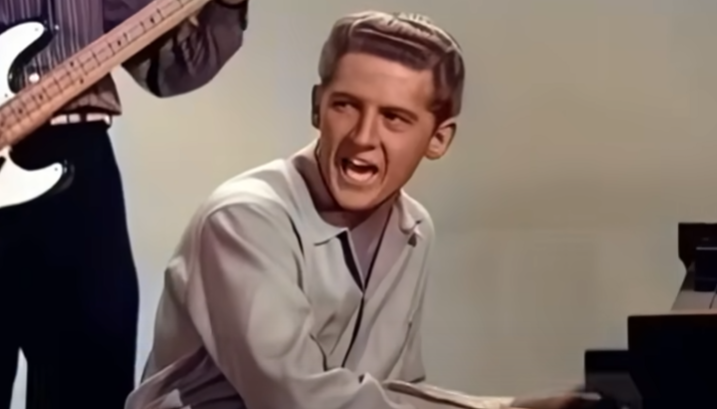 Jerry Lee Lewis, the original great wild man of rock n roll, has unquestionably earned his position among the pioneers of rock music thanks to the immense legacy he has left behind. He was well-known for his outrageously captivating theatrical persona. He possessed an endless amount of energy throughout his performances, which could be characterized as “captivating” in their most basic sense. Despite being a master of the piano, he brought a totally different energy to the music industry by climbing on top of it and even lighting it on fire.

The rock and roll energy, which many people think he developed and promoted, permeated not only his behavior on stage but also his personal life. His personal life was just as contentious and resonant as his performances. The father of rock undoubtedly deserves the moniker “great wild man” given his addiction to drugs and drink as well as his seven marriages. Even though one of these marriages nearly wrecked his career, the musician persisted.

Jerry Lee Lewis was raised in a loving but financially struggling household. His father mortgaged their home to buy him a piano when his love and skill for music first became apparent at a young age. Thus started the musical adventure that would later play a significant role in the development of music. He had already established a tone for himself at the age of 15 thanks to Elvis Presley and the musicians he had been exposed to at local bars. This fast-paced musical career was accompanied by a rapid personal existence.

At the age of 16, he married Dorothy Barton for the first time in 1952, but their union did not even survive two years. He married Jane Mitchum before his divorce from Barton was officially formalized, so when we say his private life was fast-paced, we really mean it. He was married to her for a bit longer, approximately four years, and they had kids, albeit its legality was called into doubt. But the following marriage would be the most contentious.

Lewis made a quick breakthrough as a promising rockabilly in the middle of the 1950s and kept moving forward in the music industry. He had already recorded “Whole Lotta Shakin’ Goin’ On,” “Breathless,” and “Great Balls of Fire,” three of the most important foundational pieces of the advent of rock music, as the ’60s, the golden era of rock music, arrived. At the pinnacle of his profession, he made a decision in his personal life that almost sent him flying.

His future wife would be his cousin. At the time, Myra Williams was just 13 years old. Despite the fact that his most scandalous, sexual, and unconventional acts were still new, he was well-received by the crowd and even appreciated when combined with his natural musical talent. However, this decision he made regarding his personal life was the last straw, leading to a broad boycott of him. Despite this, he continued to play anywhere he could despite the criticism. Despite the fact that his career was in danger, he would recover from this.

After the Boycotts, Lewis Made a Comeback

Early in the 1960s, Lewis had another big song, but the audience was still not fully fond of him. His union with Myra lasted until the beginning of the 1970s. When Myra disclosed that she had experienced unspeakable physical and emotional abuse, this already scandalous marriage took a turn for the worse.

Lewis wed Jaren Elizabeth Gunn Pate a year later. He also shifted his musical direction throughout these years, the 1970s, and the things he tried worked out well. About 10 years later, in 1982, Pate drowned in a pool before the divorce processes were finalized. His second marriage would likewise come to an unhappy end when Shawn Stephens was discovered dead in the home only two months after their nuptials.

After this, “The Killer’s” musical and romantic life started to become somewhat calmed down. Up until 2005, he was married for 21 years to Kerrie McCarver. The rock legend was admitted into the Rock and Roll Hall of Fame around the time of his second-to-last marriage, in 1986, and his influence on the genre was now generally acknowledged—he was even referred to as the genre’s father.

Judith Brown, who would be at his side until the day he passed away at home, was the woman he finally married. Lewis, who was as restless and wild a rockabilly in his adolescent years, was also absent throughout his final two marriages. He was producing songs less frequently, but he never stopped playing live. On October 28, 2022, at the conclusion of the previous month, this existence, braided with music, exciting stage performances, wonderful piano melodies, debt, and a brisk love life, came to an end. Whatever “The Killer” did in his personal life, he unquestionably made his stamp on rock and music history.