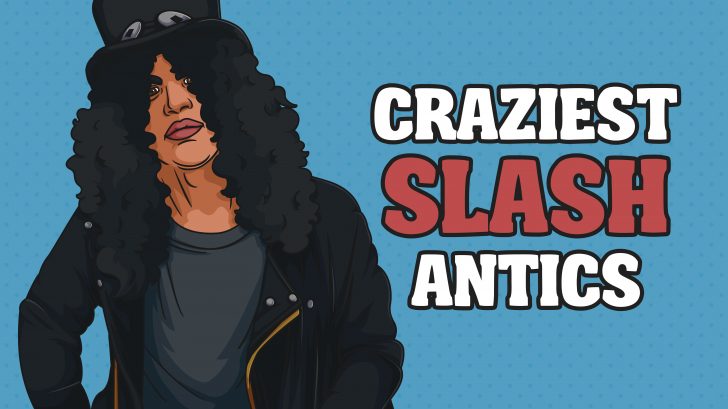 Slash, of course, is one of the best guitarists and was influenced by Jimi Hendrix, Eric Clapton, Jeff Beck, Jimmy Page, and Keith Richards. He can write incredible riffs and very melodic that are amazingly recognizable. He is passionate when playing solos and you can hear that passion every time he plays.

Slash has inspired many guitar players who came after – while not being necessarily the greatest in terms of technicality, he still has very good chops when playing melodic music, dynamics, and even writing good songs – and these, of course, are his biggest assets. You can witness this in his solos for Sweet Child O’ Mine, Don’t Cry, November Rain, Civil War, and Paradise City.

That’s all we know about his life as a guitar player, but the man had also done some crazy stuff outside the music world.

We all know that he’s been sober now for a very long time – and the reason behind his soberness was because of r a near-death experience where he was told he could have died at 35. But before toning down his abusive habits, Slash used to cash out all his checks just to buy insane amounts of heroin and cocaine. In the 90s’, being high on drugs, he was convinced that something that looked like The Predator was chasing him with weapons, but he managed to escape from him – running wild completely naked through an Arizona golf resort, smashes a glass door, took a maid as a shield and then hide behind a lawnmower.

And that’s not all – he picked up a Mountain Lion as a pet and kept it inside his hotel room, he even named the Lion as Beijing Curtis. While Slash was not around, the Lion ) escaped from the cage and completely destroyed the room before they managed to sedate him.