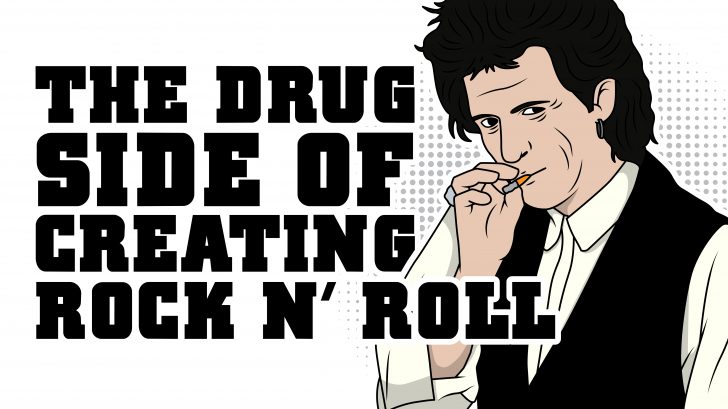 The X, Y, and Z Rationalization

There’s an old saying that “the drugs open my mind and allow me to do X, Y, or Z.” Well, drug users always try to rationalize things that they do, and why they do it. They try to justify the “side effect” of their drug use and substance abuse.

Sleeping or not sleeping for days, aggressive or irrational behavior, not eating, too much sex and way too risky, dangerous situations, compulsive, overdosing, and even death are just some of the many examples that “addicts” rationalize. Can’t blame them, it’s what they do.

When it comes to rock n’ roll, addiction is a common problem and doing drugs is more of like a privilege for these rock stars. They claim that it’s a “thing” that helps them to understand music in a better way or an escape because music becomes so depressing in a manner that they have to resort to drugs. Some stories of famous musicians use LSD ostensibly to release what they call their “creativity.”

But of course, most successful musicians don’t need any kind of substances just to write good music or perform better. Most of them use their personal experiences as an inspiration to create a musical masterpiece.

When it comes to musicians trying to rationalize their drug use the first band that comes to mind is “The Doors,” especially Jim Morrison. He indulges in a world full of wild things, and dangerous drug use in order to be creative and unlock the mystery of his art. Jim Morrison, drugs and his music is the perfect notion of the “creative personality” as if he were living in another world, who indulges in extreme passions, and dies young.

But some people claim that you really don’t need to do drugs to write good music. Well, I think there’s a point in that as well. — You don’t have to do heroin just to call yourself talented. However, substance abuse is usually a “consequence” of something else, — depression, desire, or even mental illness. Jim Morrison indulges in those things, so they became a manifestation that caused his success.

I’m not an expert on the subject, but those who are can attest that drugs expand the mind, as if as it’s trying to loosen the filter inside your head, and become a dangerous lifestyle. Tons of music is made under the influence, and we can’t argue with that. These musicians are so introverted to the extreme that the substance abuse made them who they were and gave them the courage that they needed.

Here are some quotes from my favorite stand-up comedian, Bill Hicks:

“Today a young man on acid realized that all matter is merely energy condensed to a slow vibration, that we are all one consciousness experiencing itself subjectively, there is no such thing as death, life is only a dream, and we are the imagination of ourselves. Here’s Tom with the Weather.”

“They lie about marijuana. Tell you pot-smoking makes you unmotivated. Lie! When you’re high, you can do everything you normally do just as well — you just realize that it’s not worth the fucking effort. There is a difference.”

“Here is my final point…About drugs, about alcohol, about pornography…What business is it of yours what I do, read, buy, see, or take into my body as long as I do not harm another human being on this planet? And for those who are having a little moral dilemma in your head about how to answer that question, I’ll answer it for you. NONE of your fucking business. Take that to the bank, cash it, and go fucking on a vacation out of my life.”

Creative people (or drug addicts) tend to call themselves as adventurous, so there’s no way you can ask them to back down from experimenting with drugs. Take Keith Richards, for example, — the man admits ingesting all manner of substances in his time, even confessing that he snorted his father’s ashes. So creative people or substance abuser in the rock and roll scene takes all kinds of risk, they think differently, and they drink and get high to live with their own thoughts.

So what was ROCK N’ ROLL made of AGAIN? Jim Morrison comes to mind, Steven Tyler as well, going back in time you can think of John Lennon, Syd Barrett, Eric Clapton, Jimi Hendrix, and even Johnny Cash for that matter and many more. Imagine classic rock without Pink Floyd and Syd Barrett’s contribution to the band? — Drugs and alcohol helped Jim Morrison to be himself, and not give two f**ks around him. All these said is what made “ROCK N’ ROLL.”

“You see, I think drugs have done some good things for us. I really do. And if you don’t believe drugs have done good things for us, do me a favor. Go home tonight. Take all your albums, all your tapes and all your CDs and burn them. ‘Cause you know what, the musicians that made all that great music that’s enhanced your lives throughout the years were rrreal fucking high on drugs. The Beatles were so fucking high they let Ringo sing a few tunes.” ― Bill Hicks

Here’s a little “I AM THE WALRUS” from the Beatles to justify everything I’ve said.