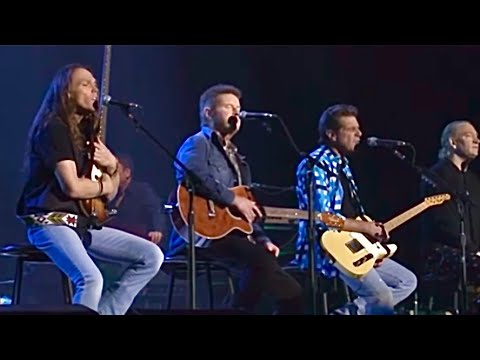 As is often the case, there are groups with a refined and elegant sound whose members take nothing short of the kill. One of them is the Californian Eagles, whose soft and polished rock contrasts with the rough relationships that some of its members maintained. Its ending was resounding and unheard of.

Before a concert they gave to raise funds for an American senator when his wife thanked each of them, Don Felder replied “you’re welcome” and then, interferential but loud enough, “I guess.” This rudeness seemed fatal to Glenn Frey, who reproached him right there, which Felder must not have thought very well. Later, during the concert, on stage, between choirs, choruses, and solos, they were saying indirect and direct to each other. Near the end Frey, guitar and vocals, said something like “Fuck you, in three songs, when the show is over, I’m going to kick your ass, little friend.” And Felder, also guitar and vocals, replied “perfect, but I can’t wait that long.” Later, in the dressing rooms, the thing did not reach the hands, although Felder, angrily, destroyed a guitar. Later, the bassist, Timothy Smith, called Frey to ask him how it was, to which the musician replied that the group no longer existed. Until fourteen years later there was a meeting, and later still Felder, he was fired, he denounced them, there were money problems, lawsuits … And three years ago Frey died. A vulgar ending for one of the most select groups.

To make the story short:

A concert in support of California Senator Alan Cranston during the 1980 tour sparked a major feud among the band members, which ended up breaking up.

It took 14 years to put aside the differences. They got together to record the compilation album “Hell Freezes Over”.

All Night Long was the last music they played before their 1980 split.