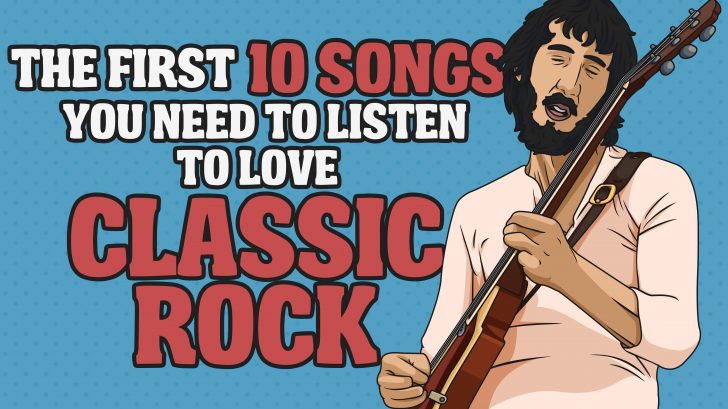 Welcome to the classic rock basics

In this day of electro-pop music in the mainstream, it’s easy for kids and young adults nowadays to skip over classic rock songs on the radio, quickly dismissing them as “old” music, thus losing the opportunity to fully appreciate its greatness and discover its influence in everything that comes on the radio repeatedly today.

Many people only build up their classic rock knowledge and appreciation either through growing up with it (’60s-’80s) or in the case of the young generation, having their parents who grew up with it expose them to classic rock from childhood. For those people who did not grow up rocking hard but would still like to love classic rock, it’s never too late! You can still independently learn to acquire your love, adoration, and appreciation for classic rock and this is an easy way to start — listening to these songs to get well-introduced to the world of rock music. Although admittedly, this is just a limited list as there are literally too many good ones out there to name without missing some, these ten songs are the gold standard of classic rock and it’s a good list to start to be able to get a taste of its electrifying energy.

Jimi Hendrix was quite literally a guitar god. His skill, his stage presence, and his music were on an entirely different level. His legendary hit, “Purple Haze”, is the embodiment of his out-of-this-world musical skill. If you want to be acquainted with what guitar riffs actually are, then you gotta listen to “Purple Haze”. In this song, Hendrix lays down a blend of old-school blues and a unique psychedelia element that just sets it apart from any other song on the planet. This is the song that proved to the world that Hendrix would be a legend in music history. Get ready for your mind to be blown:

Pink Floyd’s “Comfortably Numb” is one of the most epic songs of the rock n’ roll era. This track is from the band’s magnum opus and represents what Pink Floyd was all about. Just the guitar solos alone can turn any random stranger to rock music into an appreciative fan, if not of the genre, certainly of the band. The lyrics itself speaks so much emotion that most humans can relate to, despite it ironically being about the lack of emotion, about being numb to it. The unique combination of its instrumentation – psychedelic organs highlighted with mad complex guitar solos is jaw-dropping at best. “Comfortably Numb” is definitely one of the most precious treasures of classic rock.

The Rolling Stones – “Start Me Up”

Even non-classic rock fans would know that The Rolling Stones is one of the biggest, most legendary bands in the world of rock n’ roll. And if one wants to love classic rock, they gotta learn to love The Rolling Stones because the Stones is classic rock. “Start Me Up” is a song that’ll get you dancing and banging your head in a playful attitude. When it was released in 1981, it became one of the Stones’ biggest hit singles, and it remains relevant to this day. With Mick Jagger’s sexy strutting, engaging the audience as he sings, combined with Keith Richard’s monster guitar riff, this song will really get you started up on the loving everything about classic rock.

The Clash – “Should I Stay or Should I Go”

Released in 1982, this hit single is The Clash’s attempt at writing a classic, and write a classic they certainly did!

Singer Mick Jones says about its meaning and conception,

It wasn’t about anybody specific and it wasn’t pre-empting my leaving The Clash. It was just a good rockin’ song, our attempt at writing a classic … When we were just playing, that was the kind of thing we used to like to play.

It appeals to many things people of all kinds can relate to, but most importantly (lyrically), the inability to make decisions. It’s a controlled chaos both musically (with the wild tempo shifts and the half-Spanish backing vicals) and lyrically (revolving about an indecisive lover).

It has also proven to be timeless, continually reviving its relevance when it’s used in the soundtracks of popular movies and television shows, most recently in the thriller Netflix series “Stranger Things”. So you’ve probably heard this song before, and you’ve probably liked it.

You may have heard “Baba O’ Riley” before and knew it as “Teenage Wasteland”, as it is usually (mistakenly) called. The intro itself is already a lure into classic rock in itself. The downbeat riff gets the listener going and staying throughout the track. The catchy coda in the song is such a fun verse to sing (or scream) out loud. Watching Pete Townshend doing his windmill-strum after the synthesized instrumental is also phenomenal — definitely one of rock n’ roll’s top stage movements that has already become iconic. It’s definitely an incredible piece of classic rock that is very easy to love and put on repeat.

Even Led Zeppelin members themselves admit that “Kashmir” is their single greatest song and with good reason. That’s also big coming from a legendary rock band with numerous epic hit singles. If you want an epic rock song in the most harmonious way, “Kashmir” is your go-to song. With Eastern musical elements tied in to rock music staples, “Kashmir” is the awesome dramatic and beautiful song that will quickly become one of your favorite rock tracks.

This song probably has one of the most recognizable intro riffs in all of classic rock. It’s also probably one of Guns N’ Roses most popular singles in their discography. “Sweet Child O’ Mine” was so popular back in the ’80s but still remains and sounds fresh to this day. The lyrics speak of feelings that come from the heart and lots of listeners adhere to that emotion that it sings about, a sort of nostalgic love. The music of the song is one that is accessible and accepted by the listening public on mainstream radio. It’s a great hard rock power ballad that is very easy to love.

This is possibly the greatest song that defined Journey as one of the top rock bands of its time. The opening keyboard riff is a familiar sound across many platforms, intersecting to movies and television programs. Most notably, in recent popular media, “Don’t Stop Believin'” is the song that catapulted the musical comedy-drama for the young generation “Glee”. The inspirational and encouraging message of this rock anthem is a crowd favorite and has been for decades and has proven over the years that this song has stood the test of time. When you listen to the song, you would agree with what songwriter and keyboardist Jonathan Cain said,

“[The song] gives the listener permission to dream. I think everyone wants to believe the grass is greener somewhere else.” – Jonathan Cain

It’s a no-brainer that AC/DC’s “Highway to Hell” is one of the greatest introductions to rock n’ roll any rock novice could ever get. It’s highly energetic, it’s musicality is beyond the scale (with the guitar riff being one of the greatest ones the Young brothers ever created), and the lyrics are just fun to sing along to. It’s a perfect rock song and represents AC/DC as a band in the best way possible. When you want to welcome someone to the world of classic rock, the best route to take them is on the “Highway to Hell”.

Even as a non-classic rock listener, surely everybody has heard this absolute rock classic even at least once in their life. You probably already know the chorus by heart. It’s been used, referenced, covered, and even parodied countless times across many platforms and industries over the decades that it’s impossible for anyone to not be even remotely familiar with “We Will Rock You”. It’s a staple at sporting events, commercials, advertisements, across the world. The simple stomping and clapping along with the easy chant is just hard to resist not participating in. Want to introduce someone to classic rock easily, this is their 101.