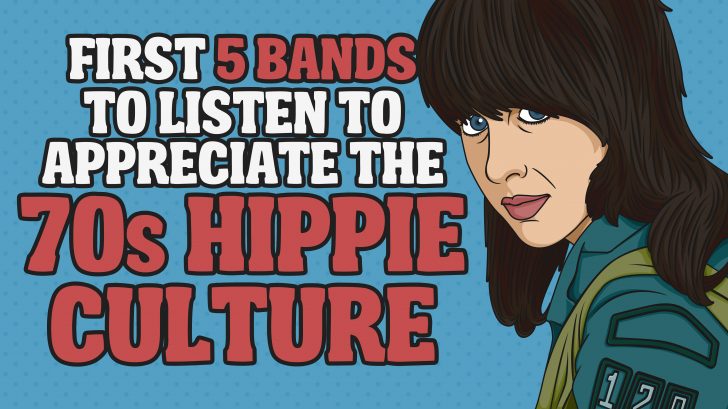 Peace, love, flower power, and lots and lots of acid. The hippie era was a time like no other, especially for music. It began as a youth movement in America in the 1960s caused by anti-Vietnam War protests, the civil rights movement, and sexual liberation with the fundamental ideals rooted on harmony, spirituality, community, and artistic experimentation in music. The songs birthed from the hippie era speak to humanity in a meaningful and timeless way, certainly they have stood the test of time. The younger generation is rediscovering this counterculture that really defined most of the 60s and the 70s. It’s really easy to appreciate when one starts with these 5 bands that represent the hippie cultural movement, influencing many musicians of today.

Probably the most popular hippie band there is in history is, of course, The Beatles. Even those who are merely just acquainted with their music and legacy would deduce that The Beatles represent the hippie subculture the most simple because, well, they were hippies. They became involved in the psychedelic movement of the late sixties, evident in their acid-laden songwriting.  Surely they had a great influence on the development and spread of the hippie movement as they will in the introduction of the movement to those who are not yet acquainted.

Jimi Hendrix can be called the greatest guitarist of all time and an ultimate hippie icon. In his short life and career, he was able to go beyond boundaries and expectations in rock n’ roll. His influence is continuous even to musicians of the modern era. His influence in the hippie subculture of the 60s was also highly significant. He and his band exuded a hippie representation in the way they dressed and the way they spoke. Hendrix himself made the velvet pants, bright patterned open chest tops, and bandanas iconic. His blues-rock music transcended the imagination because of psychedelics and the countercultural message contained in his lyrics. The band’s single “Purple Haze” became a big hit and a countercultural anthem in the summer of 1967, the Summer of Love.

The Rolling Stones came into the public consciousness with a distinct blues-rock sound that everybody went crazy for. In the mid to late 50s, they were part of the first wave of rock n’ roll defined by rowdy bluesy elements in their music. When the 60s came about along with the emergence of the hippie counterculture of the young generation of that era, The Rolling Stones rode along with it and went all psychedelic as well with their music. Because The Rolling Stones were so big and iconic, their influence is also unstoppable and they have inspired so many fans to be part of the hippie movement and send out peace, celebrate life.

The Grateful Dead emerged during the peak of counterculture movements in the 60s in San Francisco. The ‘Dead, as they have been nicknamed, has been closely associated with peace, love, LSD, and Flower Power.  They played a monumental role in the counterculture movement. Their music is a blend of rock, folk, blues, country and jazz with lyrics that ironically come off as cynical at times. The Grateful Dead is a band that is easy to jam to, and they are the face of free thinking, peace-giving and drug taking in the music of the hippie culture. They are the heart of the movement, literally, as they were based in San Francisco living among fellow hippies, representing hippie culture in itself.

If you really want to get into the hippie culture and take a trip to the past, back to the memorable Summer of Love, listening to Jefferson Airplane is one great way to start. This band’s particular psychedelic sound helped define 1960s hippie counterculture in San Francisco. Fronted by the gorgeous Grace Slick and uber-artsy singer Marty Balin, Jefferson Airplane will fly you off to worlds beyond with their free spirit brought about by evident LSD-ridden trips in their songwriting and performances. The songs they have written have become anthems for the hippie movement. Jefferson Airplane is certainly the band to get to know to introduce anyone to the wonders of the 60s hippie culture.