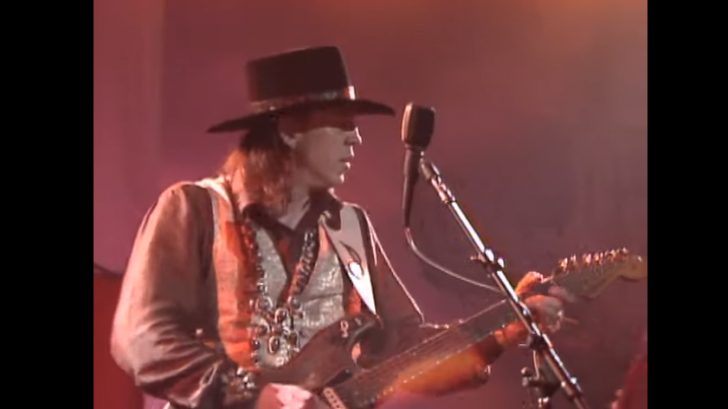 Stevie Ray Vaughan had been fronting his own band, Double Trouble, for a few years before the Dallas-born guitarist’s big break came along. What he did next defined his status as a new generation blues rebel.

Most people first heard Vaughan on David Bowie’s 1983 “Let’s Dance.” But that didn’t relegate Vaughan to permanent sidekick status, it inspired him to further his own career. Instead of continuing the accompanying tour, he focused on his own “Texas Flood” project, which also became a respectable hit.

We look back at the Greatest Stevie Ray Vaughan Guitar Moments:

It was none other than Jimi Hendrix, Vaughan’s greatest inspiration, who played the weeping guitar on the Isley Brothers’ original recording of “Testify.” It makes perfect sense that Vaughan’s power trio Double Trouble would decide to incorporate this song in their repertoire.

In 1984, Vaughan released his second album, Couldn’t Stand the Weather, which proved that he wasn’t just Double Trouble by accident and that he was capable of consistently producing outstanding guitar playing.

The single is among Vaughan’s few but remarkable journeys into the realm of Wes Montgomery-inspired jazz. He termed it “The King Tone”—the pristine tone of a Fender Strat performed smooth he put it to exceptional effect on In Step’s “Riviera Paradise.”

Together with “Testify” and “Lenny,” “Rude Mood” is one of 3 instrumentals on Vaughan’s debut album.

The tune “Hopkin’s Sky Hop,” which was composed by Vaughan and was influenced by Lightening Hopkins, is a showcase of the numerous skills Vaughan acquired. Quick alternate picking, intricate finger-plus-pick parts, or a hard-driving beat are all present.

“Lenny,” another instrumental, is a tender dedication to beloved Lenora. Vaughan opted to play the guitar given to him by his wife in the early ’80s—also known as “Lenny”—for this El Mocambo show; musically, the tune is extremely close to Jimi Hendrix’s famous “Angel.”

Any musician who dares to cover a piece by Jimi Hendrix is taking a very risky step, but Vaughan handled it in ease and produced a gem twice.

You can tell you’re in for something exceptional from “Pride and Joy’s” initial monotonous riff. Soon later, the tune changes into a traditional Texas stroll with heartfelt solo sections interspersed. Composed at the time for his lover, Vaughan takes the traditional shuffle and creates something wholly original.

“Texas Flood,” a forgotten slow-blues masterpiece from the late ’50s, was the final song to be recorded for Double Trouble’s album. Larry Davis originally recorded and released it. Before entering the recording studio to begin work on the album, the song has long been such a mainstay of Vaughan’s live performances.

Vaughan’s rendition, which was recorded in a single take, primarily drew inspiration from Davis’ structure while also elevating it to new levels. It’s a great example of how Vaughan built on the foundation set by his mentors.